The Angel Experiment by James Patterson. 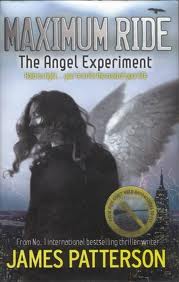 The Angel Experiment by James Patterson.


SYNOPSIS:
Fourteen-year-old Maximum Ride, better known as Max, knows what it's like to soar above the world. She and all the members of the "flock"--Fang, Iggy, Nudge, Gasman and Angel--are just like ordinary kids--only they have wings and can fly. It may seem like a dream come true to some, but their lives can morph into a living nightmare at any time...like when Angel, the youngest member of the flock, is kidnapped and taken back to the "School" where she and the others were experimented on by a crew of whack jobs. Her friends brave a journey to blazing hot Death Valley, CA, to save Angel, but soon enough, they find themselves in yet another nightmare--this one involving fighting off the half-human, half-wolf "Erasers" in New York City. Whether in the treetops of Central Park or in the bowels of the Manhattan subway system, Max and her adopted family take the ride of their lives. Along the way Max discovers from her old friend and father-figure Jeb--now her betrayed and greatest enemy--that her purpose is save the world--but can she?


I really liked the protagonist of this novel, which is rare for me. Maximum Ride, or Max, is a fourteen year old girl who, along with the five other children, is 98% human and 2% bird. I really enjoyed her character development, from her sense of loss, her desire to be normal and her struggle with feelings for fang in the latter part of the novel.I loved her mother-like relationship with Angel. The only thing i didn't like about her was the fact that she didn't share her problems concerning "The Voice" with the rest of the flock.


Fang! He was another character I really liked. He was mysterious and quiet at the beginning, but we seen the caring side shining through with angel, nudge and with his concern and affection for Max. I don't think there is anything i disliked about his character.


I also liked the rest of the flock, Angel, Nudge, Iggy,and Gasman and felt empathy towards their desire to have a family. I hated the erasers and the Whitecoats. ugh.


I enjoyed the plot a whole lot! It was a page turner from the very beginning till the final page, the cliff hanger style ending made me desperate to read the second one!I really enjoyed the fight scenes and the flight scenes were so ah-mazing. I cant wait to get my hands on the rest of the series!!!


I recommend this book to not only teens, but anyone who enjoys sci-fi thrillers and a fast paced read from a best selling author James Patterson.


Hmm.... This is where it fell down for me quality wise. Something i have noticed is that James Patterson likes to divide his books up into short chapters, which i sometimes find very annoying, especially at the beginning. Later on in the book I just had to ignored it.