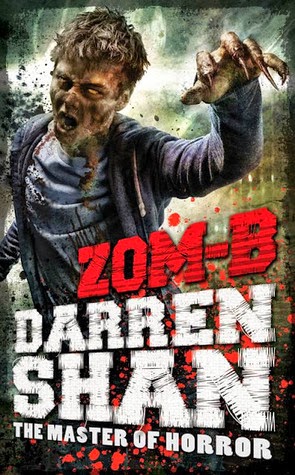 Blurb: When news reports start appearing of a zombie outbreak in Ireland, B's racist father thinks it's a joke-- but even if it isn't, he figures, it's OK to lose a few Irish.


B doesn't fully buy into Dad's racism, but figures it's easier to go along with it than to risk the fights and abuse that will surely follow sticking up for Muslims, blacks, or immigrants. And when dodging his fists doesn't work, B doesn't hesitate to take the piss out of kids at school with a few slaps or cruel remarks.

That is, until zombies attack the school. B is forced on a mad dash through the serpentine corridors of high school, making allegiances with anyone with enough gall to fight off their pursuers.

My younger brother received this book as a Christmas present last year and I have been interested in it since. I finally got around to reading it this month, which is perfect as it is spooky enough to read at Halloween. I've read the first two novels in Darren Shan's Demonata series years and years ago, and I remember enjoying them, so I was excited to read this book.

One thing I really enjoyed about this book was that it really does lay down a solid foundation for the series to build upon. In the book , the actual zombie action doesn't begin until around 75% of the way into the novel. I liked how the beginning and middle of the book gave the reader lots of background information on the lives of the characters without making it dull. I was entertained the entire way through the novel, even when there was no action or plot twists.

The characters of the book are definitely linked to my enjoyment of the novel. The characters in the book are neither all good or all bad, with the exception of a few. Our main character B is an enigma. B is really complex and has to constantly battle with the inner turmoil of wanting to be their own person and also dealing with a horrible home life. B is really violent and threatening but can also be smart and vulnerable at other times.

The relationships in the book are well written. One of the most prominent relationships in the novel are the relationships within B's family. B's  father is not a very nice man, horrid you might even say. He is a very dedicated racist who is ignorant to any opinion that is not racist .  He is also very abusive and violent. Frequently in the  novel he drinks alcohol in the house and, when he doesn't agree with a comment from B or B's mom, he turns to violence to beat them into agreeing with him. It was really sad and hard hitting to read about the domestic abuse the father inflicts.

The novel has so many positive messages in it about race equality, human rights, the effects of racism, domestic and physical abuse, abuse of power and the consequences of actions. These messages are really important, not only for children, but for everyone to be constantly reminded of.

The zombies in the book were well written. I liked the fact that they were bloody and frightening but not too gruesome as they'd only recently turned. The zombies features of elongated teeth and fingers / toe bones were something I've never read about before. I enjoyed that Darren Shan made these Zombies unique to his own series. The ending of this novel will also make you need to read the sequel, so it is a good idea to keep Zom-B: Underground near by.

Overall, I really enjoyed the book. If you're looking for something scary with a little bit of gore and some kick butt illustrations, please pick this book up. The book is the first in a series and it is a great start to what I'm sure will be a great series.