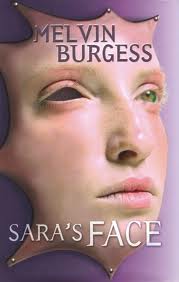 SYNOPSIS:
Sara may only be 16, but she knows her own mind. Unfortunately this means that she has decided that her face is not her own. And now she is in the clutches of unscrupulous psychiatrists who say she has “Karel’s Syndrome,” and that the only cure is to have a new face. Enter the infamous ageing singer Jonathan Heat, who has had so much plastic surgery on his face that it is now irredeemably unpleasant. He will pay for an operation that will give him Sara’s face: and Sara will get a transplant.


Hmm... the characters. I liked them but i also disliked them . I disliked Sara for her selfishness and her constant ability to undermine herself. I also found her annoying and her acts of self harm really disturbing... especially the "mirror scene".


Jonathan Heat... hmmm i seen some similarities between Mr. Heat and Michael Jackson throughout this book. I found heat's behaviour toward Sara, especially towards the latter part of the book, quite disturbing . He was a very unhinged character, who swore to innocence , which i find unlikely. I found him a very frightening character.


I enjoyed the plot and found the book hard to put down, which i was forced to do between meals and classes. I liked the twists and turns in the novels plot, from the apparitions and the lab door . I also enjoyed the ending of the novel which , as i closed the book, left me with no questions - only a sense of satisfaction of reading a good book.


I enjoyed Burgess' writing style alot in this novel, so much so that i have purchased his novel "Junk" which i hope to read in summer. His descriptions of Sara's ghosts and apparition's had me glancing nervously over my shoulder at every bump or creak in my house ! His writing was easy to visualise and was easy to read. He did a good job on building the world of celebrity Jonathon Heat and on making it seem like a novel about a real event. Overall i enjoyed the novel and found it a quick and fast paced read. I would recommend it to people who enjoy Horror without the blood & guts and thrill seekers.