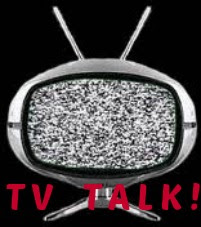 Hello guys! Wow, I have not done a Tv Talk post in a very long time. I've been a little too busy in the past month or so to watch any of my TV shows, let alone write a Tv Talk post about them.

Monday saw the return of one of my favourite shows ever. Wolfblood. I know not a lot of you have probably heard of it but trust me, it is amazing. The show follows Maddy, a teenage Wolfblood (person who can transform into a wolf ) and her friends as they go through many of the regular teenage problems and also some supernatural ones.

The show is on Mondays on CBBC at 5pm.

Wolfblood is one of my favourite shows on CBBC.

The episode kicked off with the return of Rhydian. I was so excited to see Rhydian come back but I really wasn't expecting his hair. It is so long and unruly and different.

Rhydian was being chased by what we now know were a pack of wild wolfbloods who he defied.  Maddy and her family were in the den, where they usually go on a full moon to transform. There was this scene with Maddy & her parents where they all held hands and smiled at eachother as they steeled themselves for the transformation.

I really liked the way Tom was trying to be kind to them, although buying dog treats for a pack of wolfbloods really wasn't the right thing to do.  I'm still on the fence with Shannon. She is kind to Maddy and I know she wants them to stay friends but what I don't understand is her fascination with Maddys Wolfblood . Why did she hide a camera in the den ? That is one of their most private places and she really had no right. I know she said to Tom that she wants to use it as evidence so that if people found out about Wolfbloods, she could use it to illustrate that they are not all bad.

I have a horrible feeling that when Maddy & her family do discover the hidden camera in the den, Maddy is going to feel so betrayed by Shannon, Tom and Rhydian as they all knew about it and did not tell her.

Also when Shannon ran after Rhydian, and away from the wild Wolfbloods, why did she leave her laptop behind in the forest? Could this be setting up for a plot twist where someone finds it and they find out about Wolfbloods? (Also how cute is Rhydian in Wolf form ?)

I thought it was really sad when Rhydian was talking about how Maddy's parents never wanted him and that they hated him.  Then when he stormed off, Maddy went after him and told him that she wants him to stay and they held hands and there was a moment and ....They are just adorable and need to  become a proper couple.

I also really liked the part of the episode where the Three Kay's started pushing Jimmy after he broke Kara's nail, I thought it was so funny.

I also liked the way Tom & Shannon were able to help with Maddy & Rhydians Wild Wolfblood pack problem. Taking the photos of them in mid transformation was a really clever idea and I was so worried that they wouldn't believe Maddy's threat. ( Also, how cute was it when Maddy said that she would expose Wolfbloods to the entire world to protect Rhydian).

I have a feeling the Wild Wolfblood pack, and Olric , will make good on their threat of being enemies with Maddys pack. I do think the Wild Wolfbloods are even more frightening and a much bigger threat than I had previously thought.

I am so curious to find out what happened that made Rhydian get into so much serious trouble with Olric's pack .

The ending scene was so adorable :

I totally want Maddy & Rhydian to get together and be a proper couple...but I think it may be a bit weird as everyone at school was told they were cousins so the Wolfblood secret would not be exposed..... Oh well !

What did you think of the episode? Leave me a comment below!

Check out Wolfblood on CBBC Mondays at 5pm

Posted by Shannonbookworm at Tuesday, September 10, 2013