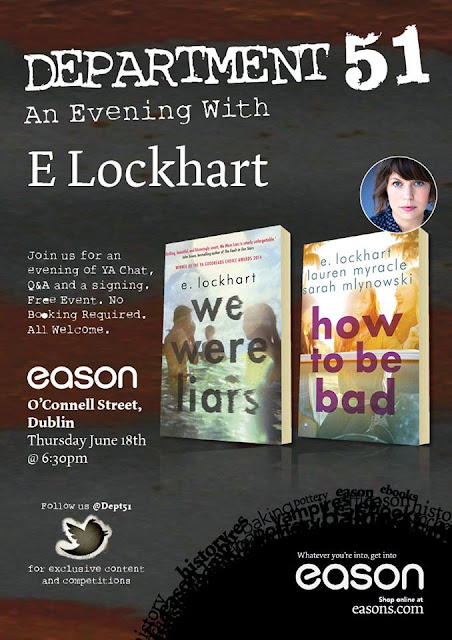 The signing was a free event held in Easons Dublin and ran by Easons special YA unit Department 51  .

Easons always put on great events as their staff are so efficient, organised and friendly.

I had only read E. Lockhart's We Were Liars (review here) and The Disreputable History Of Frankie Landau Banks (review here) before attending the signing.

I re-read We Were Liars a few days before the event to refresh my memory and enjoyed it just as much the second time round.

Although the event was mainly in place to promote her newly released in the UK & Ireland edition of How To Be Bad, E did talk equally about We Were Liars and The Disreputable History.


The area was well laid out with chairs and a speaker so everyone in the audience could see the stage and clearly hear E's stories and anecdotes that she told before launching into the Q&A. 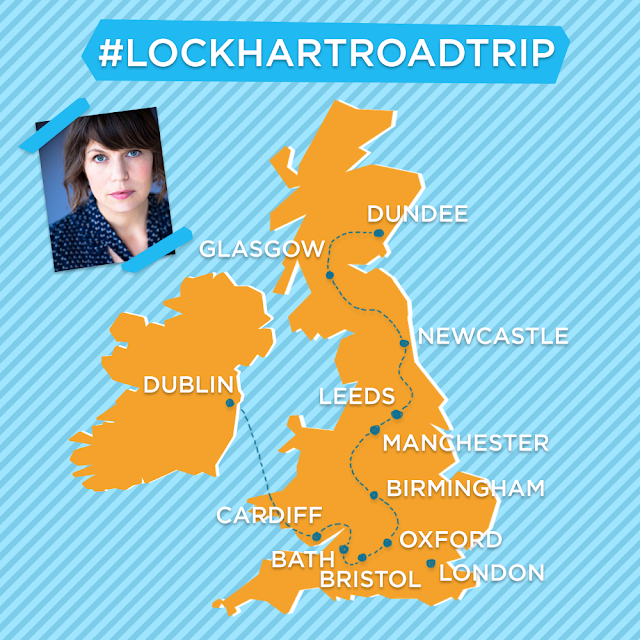 The book signing was  part of E Lockharts road trip to promote How To Be Bad's re-release. The road trip of events, signings and Q & A's all over the UK and Ireland actually began in Dublin. I thought it was pretty cool to be at the first event of the road trip and the hashtag was very fun to follow on twitter.

Soon after taking the stage, E introduced herself and her work and thanked the Easons staff. Like in her novel, We Were Liars, E had written a motto on her right and left hand that read "Be Yourself".

She then launched into talking about her books and started off by telling the audience a little about how the novel How To Be Bad , which was co-written with Sarah Mylnowski and Lauren Myracle, came to be. 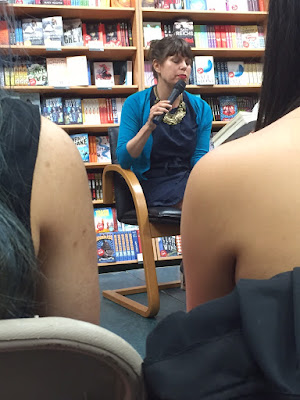 E Lockhart met the How To Be Bad co authors - Sarah Mylnowski and Lauren Myracle, at a teen / YA authors drink night which was hosted by David Levithan. E described how these nights and get together's created a sense of great community and allowed authors to come together in a way they hadn't before.

The How To Be Bad authors joked around with the idea of writing a novel together, before realising that it was a great idea! They created a MySpace group chat where they discussed and organised the  novel they would write together. The first part of the novel that the authors decided on was the setting - Florida. They settled on Florida as the authors were all somewhat well familiar with Florida.

They decided that each of the three authors would have their own protagonist from whose perspective to write their chapters of the novel from.

The authors decided for research on their novel, and to also have fun, that they would take a road trip of their very own to Florida! The funny and crazy happenings of their road trip inspired events that appear in the novel. 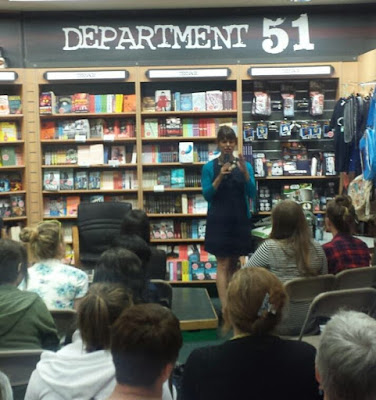 After finishing the first full write up of their novel How To Be Bad, the authors wrote and re-wrote some of each others scenes and gave suggestions on improvement. They praised each others chapters and the parts they enjoyed and they also asked each other for feedback, help and recommended improvements on some of their scenes.

Lauren Myracle came up with the title for the novel How To Be Bad. There was an Internet poll to see which title readers thought should be chosen and although How To Be Bad did not win the poll, the publishers loved the title.

E then opened up to questions readers from the audience had for her. Many of the questions were about her wonderful novel We Were Liars.

E talked about writing We Were Liars and she said that it took her two years to completely write the novel. E said when she originally pitched the novel , she pitched it as a novel about real estate, before being struck by inspiration for the plot line of the novel, and the plots twist, when driving to pick up her child from school. 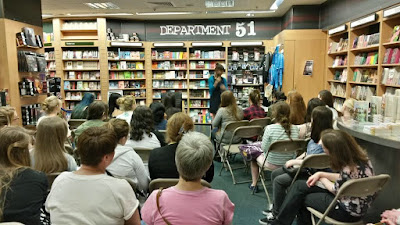 E talked about what she likes to read in her own free time. She said she enjoys reading YA novels, socially conscious novels and listening to thriller audiobooks. She said that while writing We Were Liars, she read a lot of amnesia based thrillers and really enjoyed them.

To name a few, Maureen Johnson, Jacqueline Moriarty and John Green are some of E's favourite YA authors to read.

When talking about writing, E said that writing the full complete first draft of the novel is the hardest part of the writing process. E loves to re-write the novel, fix up pieces here and there and add / remove parts through out because she thinks its fun to re-visit and add to her story.

Of the novels E has written, she feels that We Were Liars is her favourite as she feels she tried something very different to how she had written novels in the past. a different type of story that she wasn't familiar with writing and took risks and pushed herself in terms of her writing. She feels most proud of We Were Liars.

I loved reading this little recommendation for E's novel The Disreputable History Of Frankie Landau-Banks by Easons staff member Jacqueline that was displayed on the shelf. I have just recently finished reading this novel and couldn't agree more with Jacqueline's summary of the novel. 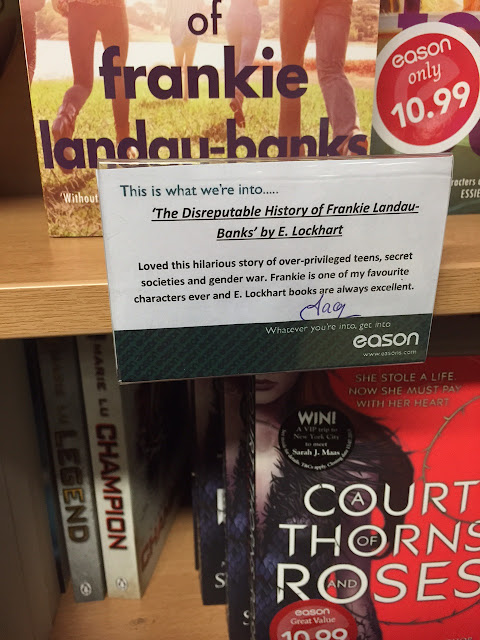 After the Q&A had finished, E started the signing. I was so happy to have all 3  of my E Lockhart novels signed and was so happy when she personalised them to me!

E was such a great speaker, the audience was hanging off he every word and was so friendly and warm.

In my copy of We Were Liars, E wrote: "Shannon! Please lie about this book.. xo E Lockhart" .

In my copy of The Disreputable History of Frankie Landau Banks, E wrote: "Shannon- Don't let anyone underestimate you. xo E. Lockhart"

I was so happy when E announced she had book plates with the signatures of the other co-authors of How To Be Bad, Sarah Mylnowski and Lauren Myracle, on them. My copy has now been signed by all three authors and can take pride of place on my bookshelf. 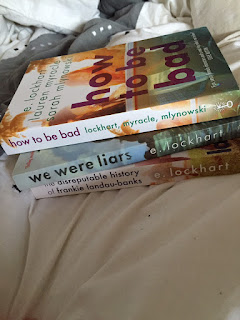 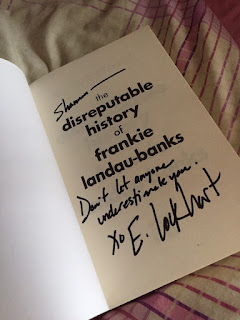 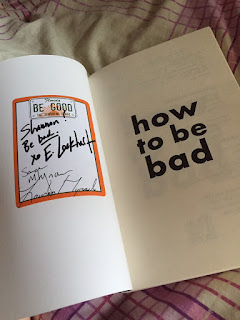 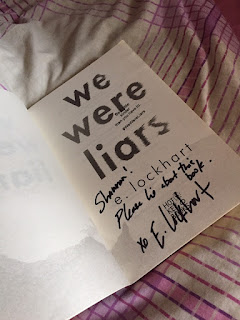 
While I was in Easons I bought a book because it was one I was highly anticipating and hearing excellent things about, I purchased Remix by Non Pratt (Goodreads) (Book Depository). I absolutely love the cover and have been recommended Non Pratt's debut novel Trouble so many times! I'm hoping to read this novel very soon and to also read Trouble as soon as possible! 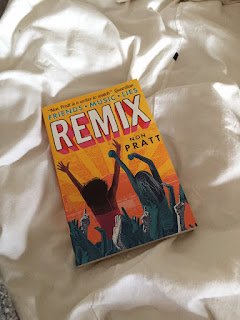 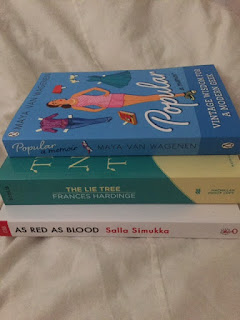 Then because the people at Easons are amazing, every member of the audience received a goody bag with three novels in it. The novels I received were :

A massive thank you to all the staff at Easons, the staff who ran the event and to all the people who introduced themselves to me at the event! It was such a brilliant day and such a pleasure to meet E. Lockhart!
Posted by Shannonbookworm at Sunday, June 28, 2015