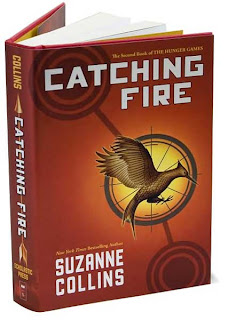 Against all odds, Katniss has won the Hunger Games. She and fellow District 12 tribute Peeta Mellark are miraculously still alive. Katniss should be relieved, happy even. After all, she has returned to her family and longtime friend, Gale. Yet nothing is the way Katniss wishes it to be. Gale holds her at an icy distance. Peeta has turned his back on her completely. And there are whispers of a rebellion against the Capitol-- a rebellion that Katniss and Peeta may have helped create.
Much to her shock, Katniss has fueled an unrest she's afraid she cannot stop. And what scares her even more is that she's not entirely convinced she should try. As time draws near for Katniss and Peeta to visit the districts on the Capitol's cruel Victory Tour, the stakes are higher than ever. If they can't prove, without a shadow of a doubt, that they are lost in their love for each other, the consequences will be horrifying.

I was so eager to pick up Catching Fire that I started reading it asap. Although it did take me a week to read, I did enjoy the novel. Once again Suzanne Collins has shown her talent as a writer as the reader is sucked back into the plot immediately.

I liked the development of the characters in this book. Katniss  becoming more mature as a result of being in the games. She is very protective of her Family. Her mother sort of wakes up from the depression she was in to look after Prim. I liked Katniss's relationship with the new games contestants, Peeta, Haymitch and Gale.


Peeta's character grew in this book, for me. I thought the change was nice, from the weak boy he was before to a protector of Katniss who could look after himself. I love Peeta, he is so sweet and caring.


I felt bad for Haymitch as he drank himself into a depression. His addiction controls his life.
Finnick - I don't need to say much because he is just awesome, one of my new favourite characters I think,

I hated president snow, he was so intimidating and frightening.
Another character I dislike this far into the series is Katniss's mom, she did not do a good job of looking after her children as she fell into a  depression after her husband died.


So, I did like this book, but in the beginning I felt it dragged a little. There wasn't much happening plot-wise. I felt really bored and kept putting it down, which is why it took me a week to read this book!
But after the first 150 pages or so, It started to pick up and I started to concentrate on the novel more. Although I found it somewhat slow in the beginning, I found that when the pacing of the novel did pick up her arena building and character building was pretty good . Definitely a read-worthy four star book !

Posted by Shannonbookworm at Saturday, July 07, 2012