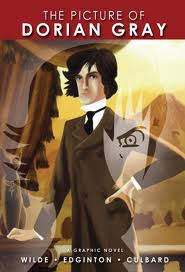 Plot- “Youth! Youth! There is absolutely nothing in the world worth having but youth!” The Picture of Dorian Gray is a graphic adaptation of Oscar Wilde’s classic work, stunningly re-imagined by writer Ian Edginton and artist I.N.J. Culbard. This Gothic morality tale is the story of a man who, taken by his own beauty, pledges his soul in a desperate bid for eternal youth. But when his wish is granted, things go terribly wrong. A painting of Dorian begins to age in his place, while Dorian himself becomes a dangerous narcissist who destroys everyone standing in his way until the day he is forced to come face to face with the ugliness of his own conscience.

I really enjoyed reading this graphic novel. I've never read The Picture Of Dorian Gray by Oscar Wilde, even though he is a famous Irish Author. I was browsing in my local library when I found this. I was really into graphic novels and manga when I was younger, like twelve or thirteen. I've never really read much of these type of book since then, as I kind of grew out of it. Yet, when I seen this in the library I really wanted to pick it up. I've been wanting to watch the 2009 movie adaptation of The Picture Of Dorian Gray, starring Ben Barnes and Max Irons for a long time. When I seen this graphic novel I picked it up because it was a nice change to read a graphic novel of the story and I could watch the movie after reading this book.

I do know the plot of The Picture Of Dorian Gray. I think I have just kept it in my memory after seeing old adaptations as a child and from hearing things from the television, Internet or jokes about the novel, and Oscar Wilde himself. I did really enjoy reading the dark tale through the graphic novel format. I really felt that the art work brought a new lease of life to the classic story. The graphic novelisation of the Classic also made it a little more modern and more appealing for teenagers or young adults to pick up the novel. Its still getting young people interested with classic literature so that is a plus for this book.
I really liked how the graphic novel still used the olde English in the novel. It made it feel like a classic and not overly modern . I really enjoyed the characters and the illustrations, by I.N.J Culbard, were so beautiful. The Illustrations really brought something beautiful to the Gothic tale of Dorian Gray's greed and lust for eternal youth. Here is an example of some of the artwork in the graphic novel : 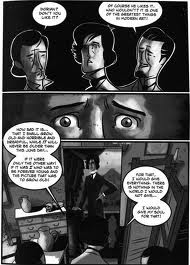