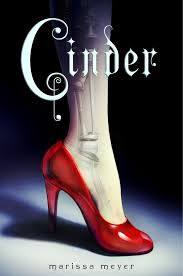 Humans and androids crowd the raucous streets of New Beijing. A deadly plague ravages the population. From space, a ruthless lunar people watch, waiting to make their move. No one knows that Earth’s fate hinges on one girl.

Cinder, a gifted mechanic, is a cyborg. She’s a second-class citizen with a mysterious past, reviled by her stepmother and blamed for her stepsister’s illness. But when her life becomes intertwined with the handsome Prince Kai’s, she suddenly finds herself at the center of an intergalactic struggle, and a forbidden attraction. Caught between duty and freedom, loyalty and betrayal, she must uncover secrets about her past in order to protect her world’s future.

So onto the review. I had heard nothing but great things about this book ever since it was released back in 2012. I had been meaning to pick it up for so long, until one day I went into my library and lo and behold, there it was on the display shelf. I quickly snatched it up before any other sci-fi loving teenager could steal it from me. I started this book, but then had to put it down for the #Debutathon, and when the readathon was over I flew through the rest of the book in one day.

The setting of the book was one of my favourite things. As an avid reader of the YA (Young-Adult) genre, I am used to reading books set in America and sometimes England. One of the countries that are hardly ever used as setting is China. I thought that reading the novel based in the futuristic China was something really different and interesting. I really enjoyed reading from the setting as we got to see a little bit of the culture in terms of family names and different foods. I felt that although it was set in the future, little bits of modern day China were shining through.

I really liked the way Marissa Meyer brought the futuristic side of the novel out. I thought that all the gadgets were really interesting. The Hover's that were used for transport, the Comms used for communication and all the androids and robots were so interesting . Meyer really wrote all of these gadgets so well that they became so seamlessly apart of the world. I also really liked the ID chips that were in the wrists of citizens, I thought that was a very unique and cool idea.

I loved the characters. And when I say loved, I mean loooved them! They were so unique and different from any other characters I've read in a sci-fi novel. They were funny, sarcastic, brave and just all round awesome. The protagonist of the novel, Cinder, is a mechanic who is part cyborg. She has a hard life in New Beijing, due to abuse from her adoptive mother, prejudice from locals because she is a cyborg and she is worked to the bone for her stepmother. I really liked Cinder. I found her to be a strong female character who could stand up for her cause. She was also a loving character, seen through relationships she builds in the novel. She was also quite a determined character who was able to think of what she wanted to do, plan it and then execute the plan effectively. I really enjoyed the sibling relationship of Cinder and Peony. I thought that their relationship gave me the same warm-fuzzies as Katniss & Prims relationship did, from The Hunger Games. Iko was one of my favourite characters of the entire novel. She was so funny and so loving towards Cinder and their relationship was lovely. I loved when Iko put on the lipstick in one scene, I laughed so much.

Another character I really enjoyed was the love interest: Prince Kai. Prince Kai is the son of the Emperor in New Beijing. He was not how I expected him to be. He was very down to earth and did not act in the superior attitude I was expecting. He was a friendly and warm character who really did care about the people of New Beijing. Something that is common in so many YA books, is "instalove". (And, no, I am not referencing Instagram). Instalove is when two character in a book fall in love so quickly that their love is instant. I don't like this as it doesn't allow the reader to see the relationship grow into a friendship and then a romantic relationship as would happen in reality. In Cinder, Marissa Meyer did a really good job of portraying the friendship growing and then developing. The characters of the book are in fact just teenagers, so head over heals serious love is a little overly dramatic for them. I loved seeing the friendship grow between Cinder and Kai, and then as they developed a little crush on each other. YA romance done right!

The character of Queen Levana was done excellent. Just the right amount of mystery with a big dollop of evil. I really liked the sinister side to the story she brought out and I loved learning about the history of the Lunars, people that live on the moon.

I also really liked that, although this is a retelling of Cinderella...Cinder...Cinderella..get it ? The retelling did not over-power the story of the novel. Sometimes when reading I would totally forget the novel was based on the fairy tale and would just become submersed in the story and setting. One critic I had about the novel was the plot. I did love the plot, I felt it was really action-based and exciting, but I did find it to be a little predictable for me. Especially when it came to the major plot twists, I could see them coming from the beginning of the novel. I don't know if it is just me that had this problem but it only lessened my enjoyment of the novel a little . I deducted a half star for that.

Sorry if this review was a little long, I just really enjoyed the book. I can't wait to read Scarlett, the second book in the series. Hopefully I can get it from the library or for my Kindle. Let me know your thoughts and feelings about this book in the comments below.

Email ThisBlogThis!Share to TwitterShare to FacebookShare to Pinterest
Labels: Dystopian, Four and a half stars, Good Romance, hype, recommended, Sci-Fi