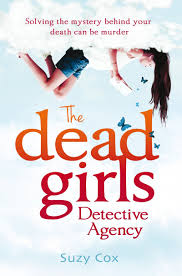 Blurb :
Being told you're dead is one thing. But having to solve your own murder? It's a lot for a girl to take in. Solving the mystery behind your death can be murder.
Charlotte wakes up at Hotel Atessa, home to murdered New York teenagers and HQ of The Dead Girls Detective Agency. Before she has time to adjust to her new, erm, dead self, she's thrust into the arms of her new afterlife companions, Lorna, Nancy and the cute - if slightly hostile - dead boy, Eddison.
But where does this leave Charlotte and her boyfriend David? Is it possible to have a long-distance relationship from beyond the grave? The only way out of this limbo is to figure out who killed her, or she'll have to spend eternity here. But who could hate her enough to want her dead?

I just want to thank Easons for sending me this Advanced Reader Copy in exchange for an honest review. The book was released in the UK on the 18 July 2013.

This was my second read for Books of Amber's #Debutathon. I flew through this book and absolutely loved it. This is the first book in a series, and also the debut book for the author Suzy Cox (Twitter : @miss_suzy_c )

When I first read the blurb I thought, "Okay. Dead girl has to find killer and float around her old life investigating.." Sounds a little like something you've seen on TV or read before, right? Well I was wrong. Suzy Cox really takes this idea and makes it her own. Her writing style draws in the reader with it Pop Culture references and teenage narrator. I know a lot of bloggers have been saying that the Pop Culture references, many about "Evanescence" & "Death Cab For Cutie", really date the novel. I disagree. Yes, they do make the time the novel is set in known, but I still watch movies from the 1980's with Pop Culture references and still love them. Also I really like Death Cab For Cutie !

The characters were really well written. We have our protagonist and newly-dead, Charlotte, who was pushed in front of a subway train on her way home from school. I really liked Charlotte's character. I thought she was a funny, sarcastic, cynical but warm and kind. She is a little whiny at times, but can you really blame her -she is dead ! I overall enjoyed her voice narrating the story.

Other characters in the novel were also really memorable. I really liked the characters of Nancy & Tess. These were the other girls in the "Dead Girls Detective Agency". Nancy was the founder of the agency and although at first she appeared a little dorky and shy, she really became a loyal friend to Charlotte by the end of the book. Lorna was another character I had misconceptions about. At first she appeared to be the stereotypical "popular-beautiful-self-obsessed" teenage girl. But throughout the novel more of her character shone through. Yes she was vain and fashion obsessed but she is also loyal, kind and trustworthy. Together Nancy & Tess were some of my favourite characters in the book. They also had some really funny lines!

Lets talk about Edison..ohh Edison. So Edison was the books mysterious loner that is attractive to the protagonist. At first I really disliked Edison. Especially after the train scene, but as I read the book I began to see a more vulnerable and caring side to his character behind the loner and evil facade. I liked that the relationship developed a little so it wasn't insta-love. I also really found it interesting that the protagonist, shocker, was not as into him as would have been expected in this YA book. She was more independent and strong-willed towards the latter parts of the novel. Will they get together in the next book? Who knows....well apart from Suzy Cox.

I really enjoyed the plot of the novel. I liked the light hearted bits, the romantic bits, the nostalgic bits, the frightening bits, the serious bits and just basically the entire novel. I felt the plot had just the right amount of humour, and not too much as to not take away from the serious issue of murder. The plot had a good mix of twists and turns, suspense and character development to keep me entertained. Throughout the book the mysterious element was one of the most gripping factors. I enjoyed reading about the detective agency and them investigating Charlotte's murder. Also the killer reveal was totally unexpected and really well done.

I think my favourite part of the book was the heart-breaking scene with Ali, Charlotte's friend. I was actually crying a little when reading it. I felt that that scene really did a good job of capturing the emotions of the people left behind and also making the reader feel a connection to the story and characters.

There was one thing I disliked about this book. This is really an issue for another day, so I'll only be brief here. Slut Shaming. This really makes me sick. In the book there is a group of cheerleaders who go after the protagonists boyfriend. Charlotte and others call them "Sluts" I hated that. Why should it matter to you what this girl does in her own privacy?  I hate the way people toss these hateful words around. Please think about what you say and how it can effect others.This only occured in the book on two or three occasions and did not take away too much from my overall enjoyment of the novel. Sorry rant over..

Overall, really enjoyed the book. I'm excited to read the second book, I'm sure this will be a great series.
The writing was a little reminiscent of authors like Meg Cabot, so if you're a fan of Meg Cabot, check this book out!

Posted by Shannonbookworm at Monday, July 22, 2013