Review: The End Of The World by Iva - Marie Palmer 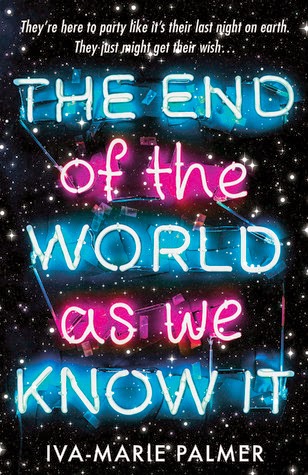 Plot: The Breakfast Club meets The War of the Worlds in The End of the World as We Know It, the latest release from Alloy Entertainment (The Vampire Diaries, Pretty Little Liars, 666 Park Avenue, Gossip Girl)
They wanted to party like it was their last night on earth. They just might get their wish….Meet the four most unlikely heroes ever:Teena McAuley: Queen Bee, first-class problem solver, resident heartbreaker.Leo Starnick: UFO conspirator, pizza delivery boy, all-around slacker.Evan Brighton: Baseball all-star, extreme virgin, Teena-worshipper.Sarabeth Lewis: Straight-A student, weekend hermit, enemy of the color pink.When Teena locks Leo, Evan, and Sarabeth in the basement during her biggest party of the year, she doesn’t plan on getting trapped in the Loser Dungeon herself. She can barely imagine a night with these dweebs—let alone a lifetime. But when an alien invasion destroys their entire Midwestern suburb, it looks like these unlikely friends are the last people on earth. Now, it’s up to them to save the world….

Thank you to Hot Key Books publishers for sending me this copy in exchange for an honest review. I have to admit , the first line of the blurb definitely sold me on this book; "The Breakfast Club meets The War of the Worlds in The End of the World as We Know It". How could you not get excited about that ?!

One of my favourite things about the novel, besides that striking cover, was the many pop culture references. From 80's movies to music quotes, the pop culture references were endless. I really enjoyed them as it made the characters seem more real because they were discussing TV and music and film like teenagers would in real life. I know some bloggers found it cheesy but I have to say I loved it!

The genre of this book could definitely be described as sci-fi blended with contemporary. The book is very modern and light while also coming down on some tough issues and action scenes . It really does offer the best of both and would be good for a reader who is more familiar with reading contemporary books and would like to dip into the sci-fi genre for the first time . Kind of like a gateway sci-fi !

The character of the book were a little mixed for me. I liked all the characters but I just found them a little two dimensional and bland, apart from Teena. Teena was a character who was one thing on the outside, with so much more depth within. I really loved seeing her character growth throughout the novel and seeing how her character developed as she was faced with so many different situations and conflicts. I though Iva-Marie Palmer handled the multiple perspective of the novel really well, and each of the four protagonists got an even time to tell their sides of the story.

The writing style of the book was good. At times I felt the writing was a little cliche and corny but still I really enjoyed it. There were some seriously enjoyable dialogues in the novel and I was very much entertained by the novel as a whole. There were times in the middle and near the end of the novel where I felt some of my interest in the plot ebbing away but the very end of the novel really was very well written.

Posted by Shannonbookworm at Wednesday, April 09, 2014