Review: The Ocean At The End Of The Lane by Neil Gaiman 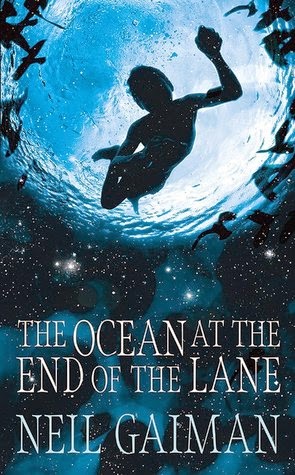 Plot: Sussex, England. A middle-aged man returns to his childhood home to attend a funeral. Although the house he lived in is long gone, he is drawn to the farm at the end of the road, where, when he was seven, he encountered a most remarkable girl, Lettie Hempstock, and her mother and grandmother. He hasn't thought of Lettie in decades, and yet as he sits by the pond (a pond that she'd claimed was an ocean) behind the ramshackle old farmhouse, the unremembered past comes flooding back. And it is a past too strange, too frightening, too dangerous to have happened to anyone, let alone a small boy.
Forty years earlier, a man committed suicide in a stolen car at this farm at the end of the road. Like a fuse on a firework, his death lit a touchpaper and resonated in unimaginable ways. The darkness was unleashed, something scary and thoroughly incomprehensible to a little boy. And Lettie—magical, comforting, wise beyond her years—promised to protect him, no matter what.

The moment I laid eyes on this book across the library, I dashed over and claimed it for my own....well I checked it out but still, for those 3 weeks it belonged to me.

This book was everything I expected it to be, and I mean this in both a good way and a not so good way.

I have read two other novels by Neil Gaiman , Coraline and The Graveyard Book, both of which I enjoyed very much. Based on my enjoyment of his previous novels, I was hoping very much to enjoy this book, his most recent .

I really enjoyed the writing style that Neil Gaiman applies to his novels. I feel that Neil Gaimans novels would make the most perfect audio books because of the fact that they are some of the most descriptively written novels I've ever read. Each and every detail is included, and each descriptive passage contains little phrases that stay in your mind after you've finished reading. His writing has such a beautiful, mythical, story telling quality that really captures the child's perspective in this novel.


The only downfall I've encountered with Gaimans writing style is that because it is so descriptive, you may sometimes find yourself lost on the story because you are so immersed in the descriptive writing style. Sometimes I was so focused on the descriptive style, I forgot what was happening with the plot at that part of the novel

The characters in this novel were very interesting and refreshing. I don't read many novels from a child's perspective, or most of the novels from a child's perspective seem to be crime novels which I don't particularly enjoy as much as Young-Adult. I found it really insightful to read this story from a single perspective and was amazed that Gaiman perfectly captured the emotions and one-sided thinking of a young child so perfectly.

I also really enjoyed the more supernatural / odd characters in the novel. I really enjoyed Lettie and the other Hempstock women at the farm. I really enjoyed their family unit and the supportive and protective role they played in our protagonists life. I also was fascinated by the depth of their knowledge and the fact that we never really learned everything about them...maybe they could return in a future novel....who knows?!

I also enjoyed the plot of the book. The book takes on this mystical and nostalgic feel as the reader is guided through the story by the memories and experiences of a young boy living in Sussex. The book is told in such a beautiful way that you feel this sense of calm when reading, although some scenes are very fast paced. I did feel Gaiman dragged out some scenes of the novel and I did find myself tripping up a little on the plot pacing but overall I really enjoyed the book and would definitely recommend it to any of you readers.

I think this book would make an amazing audio book. It is definitely a book for people who want to be left thinking long after they've turned the final page. Also if you've never read a Gaiman novel before, please pick one up...maybe start with this one!