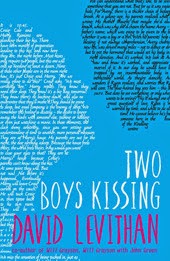 BLURB: The two boys kissing are Craig and Harry. They're hoping to set the world record for the longest kiss. They're not a couple, but they used to be.Peter and Neil are a couple. Their kisses are different. Avery and Ryan have only just met and are trying to figure out what happens next. Cooper is alone. He's not sure how he feels.As the marathon progresses, these boys, their friends and families evaluate the changing nature of feelings, behaviour and this crazy thing called love.

New York Times  bestselling author David Levithan tells the based-on-true-events story of Harry and Craig, two 17-year-olds who are about to take part in a 32-hour marathon of kissing to set a new Guinness World Record—all of which is narrated by a Greek Chorus of the generation of gay men lost to AIDS.

While the two increasingly dehydrated and sleep-deprived boys are locking lips, they become a focal point in the lives of other teen boys dealing with languishing long-term relationships, coming out, navigating gender identity, and falling deeper into the digital rabbit hole of gay hookup sites—all while the kissing former couple tries to figure out their own feelings for each other.

When I first read David Levithan, I have to admit, I was not the biggest fan. The first novel I read by him was his ever famous and praised "Boy Meets Boy" . I went into that with such high expectations and didn't feel they were met. When I read Will Grayson, Will Grayson  however, I loved his characters in it. This made me reconsider my standings on Levithan and I am so glad it did as I would not have picked up this wonderful book! Also, if you're looking for something a little more seasonal by Levithan, along with Rachel Cohn, check out Dash & Lily's Book Of Dares .

I have been wanting to pick this book up since it was released but I never got around to buying it. Then one day when browsing in my library, I saw it on the new books shelf and I just had to grab it! The cover on this UK edition is so much nicer than the US because I love typography and think it is done so well on the cover of this book to make the faces of the boys.

Lets get into the nitty gritty and I'll talk about why it is that I gave Two Boys Kissing a five star rating. Okay well first of all lets talk about the characters in the novel .In this novel, although its short in length, it is packed full of so many characters you wouldn't believe. The story is based around the two boys kissing, Harry & Craig. They used to be a couple but are no longer one. There is Tariq who sparked the idea of the kiss, there is their parents. Then there are the other couples, Peter & Neil and Ryan and Avery and then Cooper. Each and every boy and couple are different and each one has their own story. I loved the use of characters and the way that even though there are so many characters present, it does not get confusing or take away from the story in any way.

Another thing I loved in the book apart from the unique characters, was the odd and eerie way the novel was narrated by the dead. The novel is sometimes narrated by the dead, and the gay men who died as a result of AIDS. This gave the novel a solemn tone at times while also showing the reader how important this kiss was and I found it really inspirational in terms of the amount of injustice still present in the world today.

The plot of the novel was so captivating. The plot focuses on each boy / couple and their stories. The novel dips into every boys story, so it will go from reading from Harry & Craig's perspective into reading about Cooper. This transition was done very well and was not distracting or annoying to read but read with ease. The plot of the novel was really hard hitting. I can see why so many people look up to David Levithan as the king of YA LGBT novels. The topic of equality and gay rights is something I strongly believe in and support. So reading this novel and reading of the bad experiences the characters have gone through, reading of Coopers loneliness and Tariq's incident had me in tears. I cried twice during this book, this should signal to you how good this book is as it is only over two hundred pages in length and it reduced me to tears twice !

David Levithan's writing style in this novel is utterly breath-takingly genius. I loved the poetic style of writing he used at key moments in order to drive a message home in the mind of the reader, I loved his analogy's and his use of character. I loved the strong message he bring across in this novel and how he inspires and connects the reader to the issue. I loved reading about the characters strive to be accepted and to find love and learn to love themselves. The novel really connected with me on an emotional level and although very serious at times, I did laugh out loud once or twice as Levithan slipped in some humour.

Overall a captivating, inspiration, emotional and an essential read for teenagers, adults, and everyone.


“Freedom isn't just about voting and marrying and kissing on the street, although all of these things are important. Freedom is also about what you will allow yourself to do.”