Review: Before I Fall by Lauren Oliver 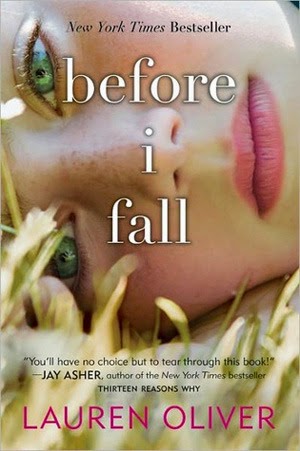 Blurb: With this stunning debut novel, New York Times bestselling author Lauren Oliver emerged as one of today's foremost authors of young adult fiction. Like Jay Asher's Thirteen Reasons Why and Gayle Forman's If I Stay, Before I Fall raises thought-provoking questions about love, death, and how one person's life can affect so many others.
For popular high school senior Samantha Kingston, February 12—"Cupid Day"—should be one big party, a day of valentines and roses and the privileges that come with being at the top of the social pyramid. And it is…until she dies in a terrible accident that night.However, she still wakes up the next morning. In fact, Sam lives the last day of her life seven times, until she realizes that by making even the slightest changes, she may hold more power than she ever imagined.

So I read this novel as part of the Chapter 5 Books  book club pick for the month of February. I had owned this book for the longest time on my kindle before bringing my kindle on holiday with me where I sat down and read this book in the space of just two days.

This novel has me very conflicted. There were aspects I liked, or think I liked and other aspects I did not like at all.

Firstly, the characters in this novel were a little up and down. A lot of characters I really did not like and a handful I actually did like. The protagonist, Sam, was an honest voice if extremely flawed and conceited. She behaved as a stereotypical teenage girl, very selfish and inconsiderate and bitchy, but I liked seeing her change a little towards the end of the novel.
Kent Mc Fuller was another character I loved in this book. He was cute, goofy, nerdy and the perfect mix of confident and shy. He was a super nice guy, probably the only one in the novel, and I think he was my favourite character.

The other characters in the novel were just awful people. They were self entitled, spoiled, bitchy and spiteful. Sam's group of friends were similar to if you imagined everything you hated about high school / secondary school all personified into a single group of people. Although they could be nice and caring at times to each other, they basically treated everyone else horribly. It made me so angry how awful they treated others at school.

The plot of the book was nothing special of I'm honest. The plotline of having to repeat the same day over and over is one that I have seen so many times on TV, movies and in other novels that it honestly bored me a little. Reading about how Sam was reliving each day after she died and trying to figure out how she could live became very repetitive and boring after a while.

The ending of the novel was described to me before I read the book as "OMG biggest plot twist ever". But honestly? It was achingly predictable and left me feeling entirely unsatisfied.

The writing style was enjoyable. Lauren Oliver's novels and work has been recommended to me a number of times and her Delirium trilogy is very hyped up and loved by bloggers. She balanced a good amount of poetic writing, with witty dialogue and great descriptions. A few blogger friends have told me that the Delirium series is much better than this novel, so I will be reading Delirium very soon!

Overall an okay read, nothing all that special but if you like the Groundhog Day type plot-line you may enjoy this novel.

Let me know below if you've read Before I Fall and if you think I would still enjoy Delirium?

Posted by Shannonbookworm at Tuesday, March 31, 2015