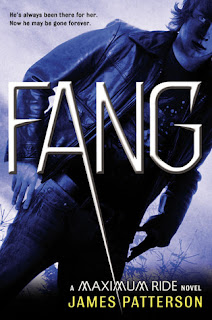 Plot- Being a kid with wings--constantly on the run--has never been easy, and Max and her flock are getting tenser than ever. First, on a trip to Africa, they meet a mysterious billionaire whose intense scrutiny of the Flock makes her fear the worst. And as if an impending apocalypse weren't bad enough, canny birdkid Angel makes a dire prophecy about Max's soul mate: Fang will be the first to die. Max's desperate desire to protect Fang brings the two closer than ever. But can the team weather the storm, or will the turmoil rip them apart for the last time?


Review *chance of slight spoilers*
Oh. My. Gasman. That was such a heartbreakingly, amazing, incredible book. I read this book in one sitting, probably around four hours, but hey *shrugs shoulders* its the holidays, that basically means sitting around and reading novels for me. (P.S hope everyone had a wonderful Christmas...Christmas book haul to come).

Lets talk about the characters. So in this novel, Angel foretells that Fang will be the first to die of the Flock. This creepy prediction only highlights my growing-dislike for Angel and her weird fascination with being flock leader. I mean Angel, you may be intelligent and whatevs but you were leader of the Flock for like two seconds and nearly got them all murdered. Thankfully you were saved by Max. So in future, all your reasons for being leader of the Flock are irrelevant. I mean is no one else getting slightly annoyed by her character? And she broke up Max & Fang! My OTP is now separated. While reading the novel, I came along a sentence that describes her character perfectly: "The scary seven-year-old with a leadership complex" (-Max).  Max is such a strong character. I sometimes forget she is only 15. She and the Flock have been through so much in only a year. The Max and Fang moments were awesome in this novel. Patterson, you know how to build romantic tension.
The "new bird kid on the block" aka Dylan. Hmm, at first I thought "This is a trap, he is a go-between for White Coats" but now I just feel really sorry for this guy. I mean, he has never had a childhood- he is only 8 months old. He was designed for Max to be in love with him and she only has eyes for Fang. I mean, try and tell me your heart did not melt every time he was in awe of the sunset or the starry night sky.
The plot of this novel was so good. Every Maximum Ride book is good, but this book really beat the last one. I was a little disappointed with the last two books, I felt they were not as good as the others and hoped that the series had not gone down hill, but this novel really boosted my spirits. The pacing was perfect and every twist and turn was so captivating. To say this book was a page turner would not do it justice. I was totally intrigued by the "prophecy" aspect to the novel and really wanted to see what happened. (Also, Angel has a Voice?!) .
On another note; When Akila and Total got married, I seriously thought that Max & Fang were the ones getting married...I was a little disappointed that it was not them but I am a huge fan of Total and Akila. I am not ashamed to say that I cried three times during this novel: I mean, how could you not tear up at that ending. I really enjoyed the ending, not that I'm sadistic or anything, but I really felt it grabbed my attention and made me want to pick up the next book, which I'm so thankful to be able to do so immediately. I also liked that there was excerpts from Fang's blog . I felt that really lightened the sad atmosphere / mood of the novel at the end.
Overall, James Patterson- you seriously know how to write novels and make readers become so attached to fictional characters.
I also recommend buying Fang, Angel and Nevermore before reading Fang as you will want to pick up the next books right after finishing Fang.