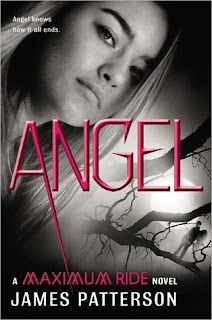 PLOT- In the seventh book in the bestselling series, evil scientists are still trying to convince Max that she needs to save the world, this time by providing the genetic link in speeding up the pace of evolution. Worse, they're trying to convince her that her perfect mate is Dylan, the newest addition to the flock. The problem is that, despite herself, Max is starting to believe it.

Fang travels the country collecting his own gang of evolved humans, but the two separate flocks must unite to defeat a frightening doomsday cult whose motto is Save the Planet: Kill the Humans. And this time, the true heroine, for once, might just be little Angel.

Review:
So after the cliffhanger I was left with yesterday after finishing Fang, I had to pick up the next book Angel. Luckily I had been given it for Xmas and could start it immediately. I read this book in one day and I feel like I have a lot to say about it.

To start off, I feel  this novel left me with more questions than I had before going into the novel. Like where has Max II (now Maya) been all this time? Where did the kids they released from the sewer go? What has that crazy-laptop-kid they met in the sewers been up to? What was he talking about when he was muttering and wandering through the desert? Whats up with Ella and Jeb? Are they evil and working together? Ugh, I'm a little frustrated by this novel. I mean why did Fang leave? Why did he want Max II (Maya) to join him? Why are they acting like this now? At least Angel seems a little less evil now, *sigh of relief*. Patterson give me some answers please.
The plot had good direction but I felt it wasn't as fast paced as Fang. I was interested in what the Doomsday Group were doing but not as much as I wanted to find out what was happening between Fang, Max, Dylan. Speaking of Dylan, can you please stop breaking into song for like two seconds? Okay? Thanks. I mean Max, how could you settle for Dylan when you could work to get Fang back..
The writing style was Pattersons usual good standard. The alternating Pov's of Max and Fang were good and well written. I just was not as gripped by this book was the last one.
I hope Nevermore is better than Angel and answers my questions. Who is the voice?!