Hi everyone. Happy New Year ! I Hope that 2017 brings you happiness.

So although I didn't read as much as I usually would have in 2016 because of college/ uni work, I still managed to read some absolutely amazing novels.

I absolutely adored all of the books mentioned on this list and you can see my full reviews of them linked below. 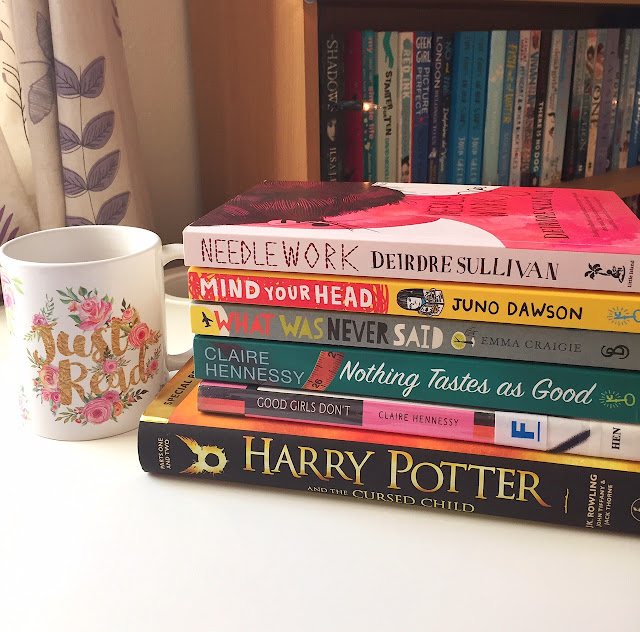 This was one of the very first novels I read in 2016 and what a great way to kick off the year!

This novel absolutely blew me away.This novel focuses on the protagonists Luke and Esther and each chapter the novels point of view alternates between them. Their relationship slowly built up and went through us and down that read as being real and really drew me into the novel. They may be one of my new favourite book couples!

The novel focused on a lot of issues from school, new friends, fitting in and first love to deeper and darker ones such as epilepsy, faith, family and lack of family, and more. Sheena has obvious talent as the manner in which she dealt with each issue raised in the book was flawless and read as being so real. I really enjoyed reading about Luke's epilepsy as it is a condition I know very little about. The diverse themes and steady pacing of the plot kept me gripped until the very end. An all time favourite definitely!

WHAT WAS NEVER SAID by Emma Craigie (Review Here)

This novel completely blew me away. This novel tells the story of 15 year old Zahra and her life after she has moved to England from Somalia. The novel deals with FGM (female genital mutilation) which is a torturous practise that is commonly performed on young girls the world over.

This novel is not an easy read. For such a short novel, it packs an almighty punch. Although the subject matter of FGM is uncomfortable to read about, it is something we should be more and more aware of.

This novel made me think good and hard about culture, practises, feminism and society's expectations of women. A harrowing, important and though provoking novel about such a cruel and excruciating practice.


MIND YOUR HEAD by Juno Dawson

Mind Your Head was one of my most anticipated releases of 2016 and it did not disappoint.
The novel written by the wonderful Juno Dawson, explores mental health in an un-complicated, straight forward way that is easy for teenagers and adults to connect with and understand.

Although dealing with a serious topic such as mental health, the novel is not a serious novel and has humorous pieces and amazing illustrations by Gemma Correll.

Entertaining and important in one, highly recommend this novel if you're looking for YA books on mental health.

Needlework could be summed up in a single word as haunting. Although this novel could definitely not be described as "comfortable easy reading" it is probably on my list of novels that everyone should read.The novel stayed with me, I could not get it out of my head when I went to sleep at night and waking in the morning it was first instinct to reach over, grab it from my bedside table and continue reading.

Needlework is a novel that deals with many issues such as abuse, family life, sex, self exploration and hopes. Deirdre Sullivan dealt with the tough issues in the novel with such precision, care and realism that it made me feel so strongly connected to Ces at times.

This novel had such a strong, emotional and hard hitting impact on me that I will never forget it. It is definitely one of the best novel I have read. EVER.

This book was the marmite book of 2016, you either loved it or hated it! I personally loved being back in the world of Harry Potter and Hogwarts and all the magical wizarding fun!

The Cursed Child tells the story of Albus Severus Potter, a boy who has had to grown up in the shadow of his dads legacy. Being Harry Potter's son has taken it's toll on Albus and through the course of the story we see how this affects Albus's life at school, his relationship with his father and also shows the expectations others have towards Harry's children.

Albus was a great character that the reader just falls in love with immediately. Scorpious was without a doubt my favourite character in this play. Sassy, full of hilarious puns and such a brilliant friend and companion to Albus. Also adult Draco was great! I loved all the little references to the original HP story too. The dialogue was so fun too.

NOTHING TASTES AS GOOD by Claire Hennessy (Review Here)


This novel was one of my anticipated releases of the year and wow it was even better than I had expected it to be. Claire Hennessy is becoming one of my favourite authors (and people!). I highly recommend this novel if you want a thought provoking, hard hitting and raw novel dealing with serious issues such as teenage life, mental health and relationships.

This novel explores eating disorders in not only a hard hitting and realistic way but also in an unusual way. The story is told through the point of view of Julia an over-weight girl who receives Annabel as a "gaurdian angel". Annabel is the ghost of a teenager that died from anorexia and decides to "help" Julia become happier by filling her head with negative thoughts as Annabel see's Julia's fat being the root of all her unhappiness.

The characters in this novel were also amazing. Every character has their own flaws and imperfections, but this makes them feel even more real and shows the reader that it is okay, and human, to be imperfect but you still deserve to be loved.

Everything in the novel, from teenage relationships, friendships, sex, school, alcohol etc- all were written with such reality and honesty. When reading the novel you realise you've felt some of these emotions, experienced some of their experiences, and this brings you closer to the story. It also highlights how body weight or size does not have any correlation to happiness, how other people respect you or your self worth.

After reading Nothing Tastes As Good, I knew that i immediately needed to get my hands on  more of Claire Hennessy's novels!

This is definitely one of the best novels I have read on sexuality and sex in YA. Claire portrays everything in such an honest and non sugar coated way. Emily's relationships with her friends are also something that was very interesting about this novel. Emily believes in fluid sexuality and often sleeps with or kisses whoever it is she feels like, boy or girl. Emily struggles a lot with conflict and fall out from these actions which I think is something a lot of readers could find relate-able.

I found myself reading this novel very slowly as I would read a little and then put the book down to think about it for a while and maybe go back and re-read passages from earlier in the novel before continuing. Claire Hennessy is growing to be one of my favourite authors with her obvious talent for both creating a wonderful story for the reader but also creating one in which the reader can see themselves.

This book was something I had heard a lot about on Twitter and Youtube and I was so glad to see it in my library.

This book is definitely one I would recommend to anyone looking for a feminist novel. The novel explores different aspects of life such as employment sexism, the sexism society teaches our children and sexist remarks / actions / assaults that women face daily.

The novel contains lots of statistics that were incredibly shocking for me and also stories that people have shared with Laura while she was writing the novel. Definitely an important read for any feminist.

Let me know if you read any of these novels too and what your favourite reads of 2016 were in the comments below!
Posted by Shannonbookworm at Monday, January 02, 2017