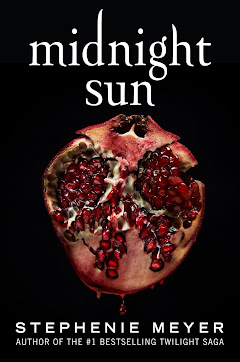 When Edward Cullen and Bella Swan met in Twilight, an iconic love story was born. But until now, fans have heard only Bella's side of the story. At last, readers can experience Edward's version in the long-awaited companion novel, Midnight Sun.

This unforgettable tale as told through Edward's eyes takes on a new and decidedly dark twist. Meeting Bella is both the most unnerving and intriguing event he has experienced in all his years as a vampire. As we learn more fascinating details about Edward's past and the complexity of his inner thoughts, we understand why this is the defining struggle of his life. How can he justify following his heart if it means leading Bella into danger?

As you guys probably know, and can assume, I was a big Twilight fan when I was 13/14. A big BIG Twilight fan. So when I heard that this book was coming out, I mean c'mon who didn't lose their shit at seeing that timer countdown on Smeyers website. I pre-ordered this straight away.
Though let me start off by saying that even when I was 14, ten years ago, and was a huge Twilight fan..I was never really very interested i reading Midnight Sun. The whole thing of just re-reading Twilight but from Edwards perspective just didn't appeal to me that much.
So I did go into this book curious to see if I'd be surprised by realising that this book would actually contain lots of new scenes and be way better than I had expected... I sadly wasn't proven wrong.
This book really was just Twilight again. I was a little disappointed but I also know that how can she re-do the story and change what she is basing this book off. Reading the same plot again in full was very boring. I really had hoped it would't be but oh boy it was.
Another thing that kinda surprised me was how much my opinions of characters had changed from when I first read the series ten years ago. To many of you that wont come as some surprise, as in ten years the way you view the world and the people in it changes a lot as you turn from teenager to adult. But for me I thought I would have some different views, but not that my views would be changed entirely.
For example, when reading the series years ago, I was hugely in love with Edward. Like massively. Now reading Midnight Sun, I realise how awful Edward is. He controls Bella, gaslights her, makes comments to make her feel bad and overall just hates women. Edward Cullen really hates women. It's crazy.
He also makes constant reference to him being a monster and being so overly dramatic. He is so filled with self loathing and emo-drama that as a teen I probably read as "broody, emotional" boy but now I read as pathetic and manipulative.
One thing I did enjoy from the book was the extra "Cullen Content" as I'm calling it. When we read twilight from Bella's perspective, we don't get to see the other Culllens much as she is just focusing on Edward and only see them as his family in scenes. In this book we get to see their family interactions, how their relationships with each other work and how much of a real family unit they are. We get to see sides to characters that we have never seen before, such as Emmett. Emmett was amazing in this book H is such a good friend and brilliant brother to Edward, always trying to lift his spirit and include him in family sports activities so he doesn't spend too much time on his own. His love for Rosalie is so strong too.
I also loved seeing Rosalie in this book, who was probably one of my 14 year old self's least favourites but now I'm like damn she really is THAT bitch. She so amazing, strong, filled with protective love for Emmett, family values and absolutely hates being immortal. She is one of the best characters in the book, even though Edward for some reason makes belittling thoughts about her. I also never knew that Carlisle turned her into a vampire so she could be Edwards "mate" because i felt Edward was too lonely.
Carlisle and Esme content in this book was immaculate. They were amazing parents and I touch on this a lot more in my reading vlog so check that out.
Thing I hated about the book: Edward, Edward, Edward. He brought down the tone of the book so much. He finds himself as being so self important that it turns the reader off him so much. He thinks he is better than everyone, not only human but vampire. He constantly refers to himself as a monster which was getting very boring upon reading it for the 27th time and the constant references to the Hades/Persephone metaphor was so boring.
The book really highlights the weirdness of Edward stalking Bella also, he even mentions it in the book himself..and yet he keeps doing it. Edward in this book is awful. He manipulates Bella, tries to emotionally hurt her so she will stay away from him, constantly describes killing her and drinking her blood and is just generally not the best. The way he talks about women in the book too was really shocking, his views are very misogynistic.
One thing I was very surprised about was Edwards extreme hatred for Mike Newton just because he fancies Bella..Can other men not find Bella attractive? She's not your property.

It got so tiresome reading from Edwards perspective because of how angry his outlook on the world made me, that I tried to just fly through the last quarter of the book. The 400 page difference between Twilight and this TOME is just Edward talking crap.
Overall, if you were a big Twilight fan back in the day, I recommend reading this just for the extra Cullen content that there is in the book. But, if you were not, don't bother. This book doesn't change anything with the story, doesn't add enough to justify the huge book. Honestly, it was a ride and I'm glad I read it to experience it but nah it was not a good book at all. Stephenie Meyer's writing hasn't improved at all in the last 10 years.
Check out my Reading Vlog on my full thoughts and reaction on my Booktube channel.

Posted by Shannonbookworm at Saturday, October 24, 2020