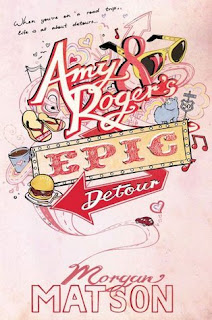 SYNOPSIS:
Amy Curry thinks her life sucks. Her mom decides to move from California to Connecticut to start anew--just in time for Amy's senior year. Her dad recently died in a car accident. So Amy embarks on a road trip to escape from it all, driving cross-country from the home she's always known toward her new life. Joining Amy on the road trip is Roger, the son of Amy's mother's old friend. Amy hasn't seen him in years, and she is less than thrilled to be driving across the country with a guy she barely knows. So she's surprised to find that she is developing a crush on him. At the same time, she's coming to terms with her father's death and how to put her own life back together after the accident. Told in traditional narrative as well as scraps from the road--diner napkins, motel receipts, postcards--this is the story of one girl's journey to find herself.

MY REVIEW:
CHARACTERS: 2/5
The characters in this book were a little bland. The main character, Amy, was predictable and stereotypical. She was boring and very plain. She was selfish and really stubborn. A few times I just wanted to shake her! Roger was stereotypical bookish boy, brooding, mysterious, bubbly and hard to figure out. I was waiting and waiting for something romantic to occur between them, and I would think sharing a bed every night would hurry this along but it wasn't until the END of the book that it finally happened! Ugh... I don't have much else to say really. I couldn't connect with the characters, they were bland and therefore, It receives two out of a possible five score.

PLOT: 2/5
The premise of this book sounded really interesting, girl alone on road trip with handsome boy- awesome, right? WRONG! The "epic-ness" of this book was highly exaggerated, eating in diners and meeting random people for less that 24 hours is NOT epic. I don't know what i was expecting , but I know that I was expecting more than this anyway. I was really bored reading this . I would read a bit and put it down for a few hours until I forced myself to at least finish it. Ughrllughbragh (*frustrated noises*)

WRITING STYLE: 3/5
The writing style of this book was Okay. It was not gripping or a page turner in the slightest. I was not hooked by this book. The dialogue was bland, simple and nothing special. There was no cliff hanger's at the end of the Chapter, or anywhere in the book actually. The whole mystery around why she thinks she killed her father in the car accident was the only mildly interesting thing....But then when I found out what actually happened it was so obviously not her fault and was a huge let-down / disappointment. Overall, the book was boring. :/