Just In Case by Meg Rosoff

Just In Case By Meg Rosoff ; 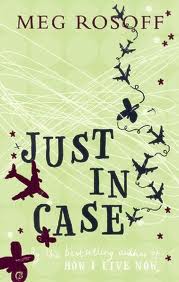 SYNOPSIS: Justin Case is convinced fate has in for him.
And he's right.
After finding his younger brother teetering on the edge of his balcony, fifteen-year-old David Case realises the fragility of life and senses impending doom. Without looking back, he changes his name to Justin and assumes a new identity, new clothing and new friends, and dares to fall in love with the seductive Agnes Day. With his imaginary dog Boy in tow, Justin struggles to fit into his new role and above all, to survive in a world where tragedy is around every corner. He's got to be prepared, just in case.

CHARACTERS: 4 / 5
Justin was a great protagonist. I really connected with him over the course of the novel. I felt all his emotion, his (brief) happiness in the airport, his fear, his terror and his love for Agnes and his brother. Although his mental disorientation, which seemed very like schizophrenia, was a little confusing and hard to read about, I felt it added to his character. For a brief time, his illness became him as it was all he could think about, fate and life. I felt similarities between his character and charlie, The Perks Of being A Wallflower, as both were eccentric, over thinkers, with slight mental disorientation. Justins ability to blur the lines between his imagination and reality, for example; Boy, was a little unnerving and frightening . At times I thought, is Peter pretending to see boy or has the lines between Justin's imagination and reality been blurred so extensively that it has passed onto others?
Peter was a great friend towards Justin. He was there for Justin and was a very loyal, supportive character. Agnes was a very real character. She was never boring and always vibrant. I liked her unique attitude in the beginning but I began to like her less towards the end. Her treatment of Justin lacked a friendly attitude after he admitted his feelings for her. All the characters were real and three dimensional, although hey sometimes were a tad exaggerated.

PLOT: 3.75 / 5
The plot was not as intriguing as the characters for me. I am in no way saying that I did not immensely enjoy the plot, I am just saying that at times the plot was slow and I was solely reading for the characters and their interactions and relationships. The book was very character and relationship driven. There were a few twists that I did not see coming; For instance, Agnes's rejection of Justin! That blew my mind, as she seemed so wrapped up in him and then she discarded him and passed him onto peter with such disregard for his feelings. A second was the Plane incident, that was totally out of the blue and it almost drove Justin over the edge! I was screaming NO! at the book as ten seconds prior to this Justin had just became himself again, shedding all his anxiety and then BAM, he became worse than before! The plot was very good and very different.

WRITING STYLE: 4 / 5
The writing style of this book was very good. I liked Rosoff's portrayal of mental disorientation in this book. It really showed the anxiety and constant fear of a person, especially a teen, suffering from a mental illness so crippling as Justins. I liked the vivid characters and the unique style of the book. It was written in a very honest way that really drew in the reader.
The plot lines and character developments were very well thought out. The twists and turns of the plot and the relationships were very well executed and well written. The character building was great. The dual narrative towards the end , between fate and Justin was very good. The theme of fate, life & death and coincidences was very intriguing and interesting to read about. The whole concept of Fate and Coincidences and how to distinguish them was interesting, philosophical and had me pondering it for quite some time. A brilliant book !

Favourite Quote:
"A piano might fall on your head, he said, but it also might not. And in the meantime you never know. Something nice might happen.” -Charlie.

Posted by Shannonbookworm at Monday, July 23, 2012