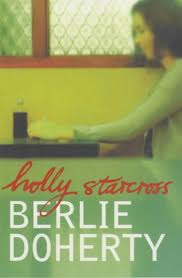 SYNOPSIS: Holly Starcross feels alone in the world. Years ago she'd been wrenched from her familiar, comforting home to a new one with her cold, TV-star mother, friendly, producer stepfather, and, eventually, rambunctious half-siblings. Ever since, she's been haunted by sadness, by dreams, by vague memories of her father and of belonging.
Recently she's developed a new friend on the Internet -- someone named Zed, who knows how to speak to Holly's secret, inner self. And a mysterious stranger in an old, battered car is stalking her. Everyone at school is frightened by this prowler. A special meeting is called, the police have been informed, escorts to the buses have been arranged.
Holly is both fascinated by the stranger and scared. She wants to meet him. She doesn't want to. Are he and Zed somehow connected? Could he -- dare she think it -- be her father? And if she meets him, talks to him, will she find herself or lose herself?

MY REVIEW:
I didn't like this book much. The characters were way too bland, and under-developed for me. There wasn't really much character development in this book. The girl in this book behaved very immmaturly for a fourteen year old. Holly behaved in a childish manner , which annoyed me as a fourteen year old does not act in this manner, well at least the ones I know do not! She looked at everything in a rose tinted sort of way. She was overly optimistic and was so horrible to her mom. I didn't like her :P

The plot was slow, there was not much excitment. The book was boring and I think a younger audience might appreciate the book more than I did.