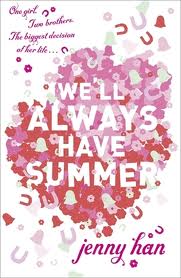 It's been two years since Conrad told Belly to go with Jeremiah. She and Jeremiah have been inseparable ever since, even attending the same college-- only, their relationship hasn't exactly been the happily ever after Belly had hoped it would be. And when Jeremiah makes the worst mistake a boy can make, Belly is forced to question what she thought was true love.

Does she really have a future with Jeremiah? Has she ever gotten over Conrad? It's time for Belly to decide, once and for all, who has her heart forever.

I read this book in a day! I loved the first book in the Summer Series, The Summer I Turned Pretty. Then when I picked up It's Not Summer Without You, the second book in the series, I didn't like it as much . It has sort of become a tradition to read these books, I read the first book two summers ago and the second book last summer, its almost become tradition to read these books in the summer! I'm sad the books have come to an end.

The characters in this book are so real. Conrad and Jerimiah are so sweet. Jerimiah is the sensitive one and Conrad is the good looking older brother. Belly is such a nice character too. She is sweet, kind, loyal and relatable. I really enjoyed reading about her character in college. Having a boyfriend and being in college, is a theme that would interest people a few years older than I but I still enjoyed it.

In the first book, I was 50-50 as to who Isabell (Belly) should be with. In the second book, I was leaning more towards Jerimiah as I thought Conrad had become a tad selfish. In this book, I thought Jerimiah changes SO much. Usually I would be rooting for him but his character took a turn for the worse. He smokes weed, drinks and cheats! I was rooting for conrad in this one as, personally, I would not take someone back after cheating. When the truth of Conrad giving belly away to Jerimiah was revealed I knew Conrad was meant to be with her. The letter-thing, from Suzannah, at the end was kinda mean I thought on her part. The ending was very saisfactory though. The book was really good and a perfect summer read- The best summer read of my summer!

The weather was warm so I sat out and read this whole book , It was so good. If you haven't read The Summer trilogy by Jenny Han, then you should definitley check out this series!