The Adoration Of Jenna Fox by Mary E Pearson 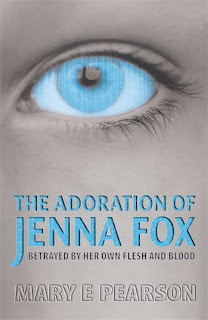 Plot: Who is Jenna Fox? Seventeen-year-old Jenna has been told that is her name. She has just awoken from a coma, they tell her, and she is still recovering from a terrible accident in which she was involved a year ago. But what happened before that? Jenna doesn't remember her life. Or does she? And are the memories really hers?

This fascinating novel represents a stunning new direction for acclaimed author Mary Pearson. Set in a near future America, it takes readers on an unforgettable journey through questions of bio-medical ethics and the nature of humanity. Mary Pearson's vividly drawn characters and masterful writing soar to a new level of sophistication

My Review:
Now, this book really wasn't for me guys. But , I am proud that I finished it anyway!

Firstly the characters. The characters in this book were really mysterious, and at first I thought that was interesting to start the book with. But as the novel progressed, I found that the characters were not mysterious..they were just not developed or thought about properly at all. The characters from Ethan, Allys, Dane, even our main character Jenna was so under developed. Another thing about this book that bugged me was the half assed love triangle. Ethan, the nice guy who shows interest in Jenna and the mysterious Dane who is a loner and different. This love triangle was not developed at all. Even when Jenna wanted to get involved with Ethan, she did in a way like she didn't even care... err, hello?
The plot was slow at times and confusing. I felt it became slow in the middle of the novel, but then the pacing would speed up and slow down just as quickly. That really bugged me as I like when a novel has a good pacing to it. Another thing was that all the "Science" aspect to the novel left me really confused as to what was really going on or what the characters were discussing. Chemistry, Physics and Biology are in no way subjects I enjoyed in school. All of the BioGel and Backup brains really left me confused and frustrated.
The writing was also not great. The writing style sort of made me think of the novel as Jenna's constant stream of consciousness turned into a novel. It was jumping from topic to topic and that made the book annoying. One thing I liked was the grey poetry pages. That was a nice touch to the novel. The novel really makes you think about what it is to be Human, to be truly alive and how far is too far to go in the world of science? That was Interesting.

My Rating:  Two and A Half Star novel * *
Posted by Shannonbookworm at Wednesday, November 07, 2012