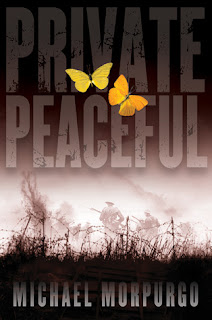 PLOT: From the Children's Laureate of England, a stunning novel of the First World War, a boy who is on its front lines, and a childhood remembered.

"They've gone now, and I'm alone at last. I have the whole night ahead of me, and I won't waste a single moment of it . . . I want tonight to be long, as long as my life . . ." For young Private Peaceful, looking back over his childhood while he is on night watch in the battlefields of the First World War, his memories are full of family life deep in the countryside: his mother, Charlie, Big Joe, and Molly -- the love of his life. Too young to be enlisted, Thomas has followed his brother to war and now, every moment he spends thinking about his life, means another moment closer to danger

My Review:
Although I enjoyed this book, I did not enjoy it as much as I thought I would have.
The characters in the book were interesting. We have the  love triangle as two brothers, Charlie and Tommo, who are in love with their childhood friend Molly. The characters were not developed enough for me but I still enjoyed them.

I liked the way that each chapter opened with a time recalled in a long night for Tommo. That was interesting and only at the end do we find out what the significance of it is. I think I would recommend this book for History Buffs as it really shows that not all men were forced to enlist in the army, the conditions of the trenches and the effects on the soldiers.
It was a very touching story that was so well written. Michael Morpungo has an amazingly vivid writing style. I read this in a day so it is good but I personally did not feel it was "great".
There is a movie coming out, or maybe it is already out, I'm unsure but I'll leave the trailer below.

Posted by Shannonbookworm at Saturday, December 01, 2012