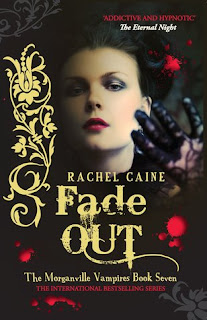 Plot- Without the evil vampire Bishop ruling over the town of Morganville, the resident vampires have made major concessions to the human population. With their newfound freedom, Claire Danvers and her friends are almost starting to feel comfortable again...
Now Claire can actually concentrate on her studies, and her friend Eve joins the local theatre company. But when one of Eve’s castmates goes missing after starting work on a short documentary, Eve suspects the worst. Claire and Eve soon realise that this film project, featuring the vampires themselves, is a whole lot bigger—and way more dangerous—than anyone suspected...

My Review:
So this is a review of the seventh novel in the Morganville vampires series, if you have not read the books previous to this one in the series I recommend you do not read this review.

The end of Carpe Corpus pretty much ended a huge part of the series and I didn't really know how Caine would carry on the series after that.  Although I feel this book didn't contribute much to a plot, I did enjoy it.
The characters of this novel are great. I have become so attached to them over the course of reading this series. Especially Myrnin. How can you dislike this blood thirsty, yet adorable, smart bunny slipper wearing, vampire scientist? I kinda really want Myrnin and Claire to get together. I feel there were many hints at a relationship developing between them in this novel. Also, I used to really like Shane & Claire, but I found their relationship becoming a little monotinous and boring in this novel. Eve is one of my favourite characters in this series too.  A character I really hated in this novel was Ada...she was getting in the way of my Myrnin and Claire moments !
The plot of this novel was a little irrelevant. I find these novels to be mostly character based, I read to find out what happens next to the characters. The plot of this one was interesting at times but I really found the introduction of the new character to be pointless. The end of the novel was suspenseful and well written.
I love the Morganville Vampire series and although I had a few query's with it , I overall enjoyed it .