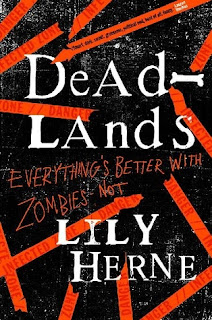 In Deadlands, life is a lottery.

Ten years have passed since Cape Town was destroyed in the war with the living dead. Now, human survivors are protected from the zombies that lurch around the suburban Deadlands by shrouded figures known as 'Guardians'. But the price for protection is steep: each year, the Guardians hold a human lottery in which five teenagers are chosen for a secret purpose.

Seventeen-year-old Lele hates everything about her life in the city: her new school, the brainwashed zombie-lovers, the way everyone seems creepily obsessed with teenagers . . . She wants out. Then she is picked as a Chosen One: but she's not prepared to face whatever shady future the Guardians have in store for her. So she runs for her life - straight into the Deadlands, and into the ranks of the Mall Rats - a renegade gang of misfit teens who have gone underground - and are preparing to take a stand.
.
.

I was sent this ARC (Advanced Reader Copy) for review by Easons. Thank very much!
I really enjoyed this novel and I don't have a great track record with Zombie novels. This was a book that I had no expectations for and heard no hype about, but when I came out of it I was the one raving about it.
The characters in this book were exceptional.
The protagonist of the story, Lele, is a rebellious, opinionated, arty teenager. She knows that she cannot trust the government and she knows that she doesn't fit into their "cookie-cut" perfect society. I really enjoyed her character because to me, she felt like a real teenager. Most of the time in YA books they make the teenagers sound a little less like seventeen and a lot more like thirty four. Lele felt to me like such a real teenager and I felt really connected to her character. I really enjoyed her funny, angsty and sarcastic comments thrown into a serious situation. Lele's character was on all accounts the perfect protagonist for me to read in a novel like this.
Lele's strong family connection also made me closer to her as she has a very protective nature around her family and especially her disabled brother. I found it heartbreaking to read about her brothers disability but I think Herne did such a beautiful job of writing his character and the relationship between siblings.
The other characters in the novel were also without compare. Thabo, the dreadlocked anarchist who is the main love interest for Lele , in the beginning at least, was one of my favourite characters. He had such strong views about the society they were living in and he was just such a gentleman to Lele. I loved the relationship between Thabo and Lele in the novel.
The Mall Rats themselves were so awesome. They're a group of highly trained teenagers who live underground outside the enclave, in the Deadlands. They're trained to kick zombie butt by an ex-army officer/ G.I Jane -esque woman. I loved all they're characters. Saint was a little apprehensive towards Lele at first but once she warmed to her, we got to see the soft tender side to her. She's a pretty awesome fighter with her fire chains too. Ginger was adorable. He's a British guy who was on holiday when the Zombie apocalypse broke out. His weapon of choice is a terrifying chainsaw and I loved his constant stream of movie references throughout the novel.He is such a nice, cheerful guy.  Ash is the leader of the mall rats. At first he was even more apprehensive toward Lele than Saint, but once he spent more and more time with Lele and got to know her, they developed a bond. As often seen in novels, and real life, friendship and blossom. I thought Lele and Ash made a great team, and an even better couple, and I can't wait to see their relationship develop in the next novel, Death Of A Saint, which is released sometime in October.
Lily Herne did an excellent job of captivating the reader with this first novel in the Mall Rats series. I loved the extras in the novel, like the interviews from the outbreak of the Zombie apocalypse and the Wanted poster. I loved the look into the evil Cult at the base of the flawed Society and the political aspect to the novel. I cannot wait to read the second book!

Posted by Shannonbookworm at Thursday, March 28, 2013