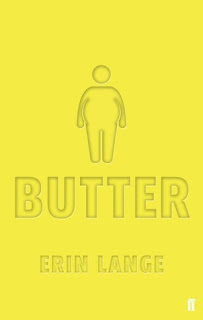 You think I eat a lot now? That's nothing. Tune in December 31st, when I will stream a live webcast of my last meal. Death row inmates get one. Why shouldn't I? I can't take another year in this fat suit, but I can end this year with a bang. If you can stomach it, you're invited to watch ... as I eat myself to death.

So starts Butter, the story of a lonely 423-pound boy everyone calls 'Butter'. Worse than being ridiculed for his size at high school, he is simply ignored. Desperate, he pledges to eat himself to death live on the Internet - and everyone will watch. When he makes this announcement online, he expects pity, insults, or possibly sheer indifference. Instead, his classmates become morbid cheerleaders for his deadly plan.

Yet as their dark encouragement grows, it begins to feel a lot like popularity. And that feels good. But what happens when Butter reaches his suicide deadline?
.

This was a really good novel, thank you to my friend who let me borrow it ! I did have a few problems with the book but overall I enjoyed it. I think I'll start off with the negative and finish on a high note.

I have a problem, some may even call it a curse. I have the ability to predict the end of a story,or its plot twists, early on in a novel. This doesn't just happen to me with books, but also with movies and Tv shows. This happened to me when I was reading this book. I was able to predict what was going to happen and how it was going to end. That kind of annoyed me as sometimes in this novel I had predicted a better twist in the plot that what actually happened. I did like the way the plot unfolded but I sometimes feel that my almost unconscious ability to predict plot lines lessens my enjoyment of the novel.
I really liked reading from the perspective of Butter. He didn't dance around the topic of his eating problem. He gave us a clear view of his home life; over compensating food pushing mother and a cold stand-offish father. I also liked his "add humour to diffuse tension" personality. I really enjoyed reading about the friendship he had with his fat camp friend. The jealousy that was there was understandable and I could feel how hard it must be to be left behind while his friend gets better. I really enjoyed the modern side to the novel as it incorporated the Internet, chat rooms and live streaming, all of which would be an average part of a teenagers life.
Some scenes in this novel were very graphic and were a little hard to read. Lange writes about Butters eating problem with such a crisp, clear realistic way and doesn't shy away from the gory details. I really enjoyed this as if I were to read this book and the author had "fluffed" over the disorder and depression in the main character, I would have felt both uninterested and unconnected to the protagonist. Lange created such realistic characters. Even the bully's and the on lookers were very realistic. I feel that Lange also hit gold when she incorporated Butters escapism- Jazz music and Saxophone. This can really pull readers into the story as although I personally do not play the Sax, I do use reading as my escapism. There is that one thing that everyone does after a long, hard day to get away from it all- whether that be having a cigarette or strumming on your guitar.
When I was reading the novel near the beginning, and I was reading how Parker and the rest of the gang were planning the last meal and egging on Butter to commit suicide. I felt sick. I thought, Oh my god. How could someone actually encourage someone else to take their own life, let alone make light of it. Yet it is a horrible truth that many people would be the same as Parker and those guys. There is a quote on the back from a reader saying that this book makes you think is there a difference between being the bully and being the on looker who does nothing? How many times could any of us have stopped something we knew was wrong but have just decided, hey not my problem, and walked away. This novel not only makes you think about Suicide, Life, Death but also if we are so different from the people we are so quick to label as the bully's. This book really provokes thought and I would highly recommend it to those who liked Cut by Patricia Mc Cormack & Go Ask Alice.