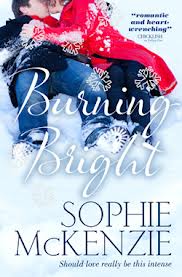 Plot- The second title in a new four-book romance series from the Red House Book Award–winning author of Girl, Missing.
Four months have passed and River and Flynn are still going strong. But things are not perfect. Flynn continues to fly into unprovoked rages, and when River tells her mum, she is banned from seeing him. Fighting to stay together, they end up being torn apart. Is it all over for River and Flynn?

Add This to your Goodreads.

After I finished reading Falling Fast , the first book in this series, I was desperate to get my hands on the sequel. This book met some of my expectations and I feel it was just as good as its predecessor.
I think this book shows how a sequel can be done well. I was happy with the flow of events as this novel carries on a few months later from Falling Fast. If you've read the first novel, or if you haven't you should, I think you will enjoy this sequel.
Sophie Mc Kenzie is one of my favourite Authors. Last year, when I read this book I was surprised that she had written it as most of the books I've read by her are thriller novels, such as Blood Ties or Girl Missing. Her novels are always exceptional testimonies to her ability to create characters, plot, setting and an enjoyable reading experience. I think I would classify these novels as "guilty pleasure" reading. The writing is full of realistic romance with a few cliches added for good measure. I think the novels are well written, with lots of detail and dialogue to capture the readers attention from the get go. The chapter length is not too long or short. I think that is a really good aspect of her writing, as the varying length of chapters will keep reluctant readers gripped as they are not too long and more avid readers happy with the variation.
The characters of this series are enjoyable. The protagonist; River is a normal teenager. She has a great bunch of friends who are stuck to her like glue. I think River can be a little over dramatic at times, but she is really interested in acting so it probably suits her character. She is sometimes a little stroppy but I can forgive her that as her mother does not always treat her very fairly. I felt sorry for River in this novel as she has to carry so much on her shoulder in this novel. She is lumped with others problems and then she has to face dilemma's herself. I also felt she was growing apart somewhat from her friends in this novel.
The love interest comes in the form of Flynn. A bad boy type that has a creative, arty flair. He comes from a difficult background of domestic abuse. His father was very violent towards his children and wife when Flynn was a child, and Flynn was once attacked by his father. It was really harrowing to read about Flynn's past and his hatred towards his father. As a result of his past, Flynn developed Anger Issues as he resorted to violence to deal with problems, and keep his family safe. I could feel the anger from Flynn and reading about how it was effecting River was horrible. I was glad with the solution in the end.
The plot of this novel was really good. I don't see many Young Adult / Teen novels that deal with anger problems in young people. I think that problems like this should be addressed more as many young people are affected by their own anger, and not being able to release it, or struggling to deal with others anger issues. I was really interested to see how this subject was dealt with in the novel and I think Mc Kenzie did a wonderful job of touching on the slightly darker subject.
Although the novel was a little boring a times for me, I felt it really picked up as soon as it started to drop. The ending was really well written as were all the plot twists in the novel. The character development was evident in the novel. As the characters are only fourteen or fifteen, I did feel like it was a little young for me at times, but I still enjoyed the novel. I also really like this cover but why does the model for River have blonde hair when the cover model of the first book had brown hair? I always thought River had brown hair, so why the cover model change?
Overall I would highly recommend this series. This is going to be a four part series. The first book is called "Falling Fast" and the third novel in the series "Casting Shadows" is to be released on July 4th of this Summer. A perfect summer read and I can't wait to read the next instalment. I also would like to recommend you read Sophie Mc  Kenzie's other series' the "Girl, Missing" series and the "Blood Ties" series.