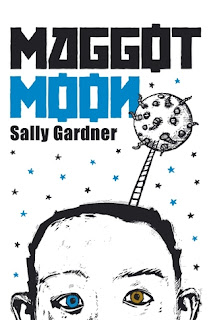 In Sally Gardner’s stunning novel, set in a ruthless regime, an unlikely teenager risks all to expose the truth about a heralded moon landing.

What if the football hadn’t gone over the wall. On the other side of the wall there is a dark secret. And the devil. And the Moon Man. And the Motherland doesn’t want anyone to know. But Standish Treadwell — who has different-colored eyes, who can’t read, can’t write, Standish Treadwell isn’t bright — sees things differently than the rest of the "train-track thinkers." So when Standish and his only friend and neighbor, Hector, make their way to the other side of the wall, they see what the Motherland has been hiding. And it’s big...One hundred very short chapters, told in an utterly original first-person voice, propel readers through a narrative that is by turns gripping and darkly humorous, bleak and chilling, tender and transporting

Maggot Moon was such a unique and memorable book. An awe-inspiring book that leads readers on an original journey from the pen of Sally Gardner.

The characters of this book were very well written. The book is told from Standish's perspective. Standish is a very odd and different boy. He does not fit in with other kids at school, has one brown and one blue eye and is also living with his Grandfather. Standish provides an honest and simple narrative of the story. I really enjoyed reading the book from Standish's perspective as everything was told in clean, crisp, simple and short sentences which really pulled the reader into the story and let the story flow from the page. I also felt that Standish was a little similar to Christopher from The Curious Incident of The Dog In The Night-Time by Mark Haddon, as they told the story in a unique way because of their asperger's / OCD- like tendencies. This made the narrative side to the story really enjoyable and made for a unique perspective.

Other characters like Hector were also unique. I really enjoyed seeing the relationship and friendship develop between Hector and Standish. They became such amazing friends and it was really heart-warming to see their friendship blossom. I also loved the way they would make the space ship together, like it was their special place. The Grandfather was also a character I liked. I thought that the grandfather was a very strong man. He knew what he had to comply with to keep Standish safe and what he had to go against. He was a really clever character, always conscious of being watched by the government and their spies. He was also a loving figure and it was nice to see him looking out for Standish and Hector's family.

The plot of the book was based around a moon landing. The dystopian planet that Hector is living in, are preparing for a moon landing. Everyone is so excited that they will have footage of people from their planet landing on the moon. The government is force-feeding everyone this information and excitement to throw off any non-believers. But, of course, everything is not what it seems... I really enjoyed the plot of the book, it was fast paced and well written. I felt the plot was a very unique and interesting take on the Dystopian genre.  I also found myself drawing similarities between the dystopian society in the novel and fascist society's in the past. I don't know if this was intentionally, if Sally Gardner gained her inspiration from such events, or if it is the over active imagination of a history student! I found the plot to be really intriguing and loved the moon-landing aspect as I've not read many books about the moon-landings.

The writing style of the book was great. I originally picked up the book because I thought it was written by Sally Nicholls, author of Ways To Live Forever - one of my favourite books. I was pleasantly surprised to see that it was another authors work entirely. I really loved the writing style of the books.I enjoyed the ending of the book and feel that the ending was left a little ambiguous..is there a sequel in the works? I feel that Sally Gardner has created a novel narrated by a unique character set in a dictatorship that is an original addition to the YA Dystopian genre. I would whole heartily recommend this book to fans of The Curious Incident of The Dog in The Night time by Mark Haddon  and  Wonder by R.J Palacio.