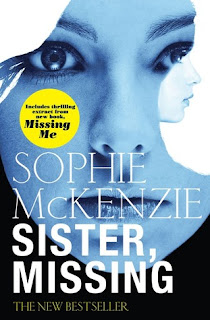 Blurb : It's two years after the events of Girl, Missing and life for sixteen-year-old Lauren is not getting any easier, as exam pressure and a recent family tragedy take their toll. Lauren's birth mother takes Lauren and her two sisters on holiday in the hope that some time together will help, but a few days into the holiday one of the sisters disappears, under circumstances very similar to those in which Lauren was taken years before. Can Lauren save her sister, and stop the nightmare happening all over again?

I read Girl, Missing five years ago and absolutely loved it. It was one of the best books I'd read at that time . I remember talking to my friends about it and letting them borrow it because I just had to share my love of the book with my friends. I think it was one of the books in my childhood that made me really passionate about books.

After the ending of Girl, Missing, I was satisfied with the ending of the book. I felt it summed everything up really well and was surprised to hear that five years later, a sequel had been released. I was really excited about the book but also really nervous that it would not be good and would ruin my feelings for the series. I did enjoy the sequel but not as much as the first book.

I found it really interesting to see Lauren a little more grown up as she is now sixteen. I really enjoyed her as a character but I did feel she could be a little selfish and head strong at times. Although she can snap at people you could see why she was feeling the way she was. Another character I still loved is Jam. He is such a funny character and I love his relationship with Lauren- although they had a little bit of a rocky time in this book. I found it a little strange that he would side with Shelby than Lauren a lot in this book. I thought that there were hints of a relationship between him and Shelby but thankfully it was not the case.

Shelby is a complicated character. I know she is the bitchy, mean and malicious girl of the story, yet at times I felt sorry for her. She was happy with her parents and her sister, when Lauren showed up and rocked the boat a little. Her normal lifestyle was altered to suit Lauren's needs. She did reveal that she was jealous of how everything Lauren did was perfect in her parents eyes and that she felt inferior to her. I did feel sympathy for Shelby and I feel that if her and Lauren had gotten off on the right foot they could have been friends and not enemies.

The plot of this book was good but not great. I didn't feel drawn to the plot until about 70 pages in. I felt the story was a little slow in the beginning and lacking that spark to draw in the reader. I enjoyed the fast paced storyline that is expected of Sophie Mc Kenzie- queen  of teen thrillers! I really enjoyed the twists and turns, and although I foreshadowed and seen many of them coming, I was really surprised with the twists in terms of the parents, Rick and the ending. Sophie Mc Kenzie does not fail to disappoint her readers and provides a sequel that is fast paced and action packed.

I flew through this book in a day as it was a great and gripping read for a hot summer day. My sister had the next book on her shelf so I plan to get to that soon- hopefully.