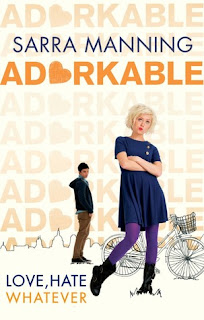 Welcome to the dorkside. It's going to be a bumpy ride.
Jeane Smith's a blogger, a dreamer, a jumble sale queen, CEO of her own lifestyle brand, and has half a million followers on Twitter. Michael Lee's a star of school, stage, and playing field. A golden boy in a Jack Wills hoodie. They have nothing in common but a pair of cheating exes. So why can't they stop making out? This novel is about an unlikely relationship, but it's also about roller derby, dogs on skateboards, dogs on surfboards, dogs doing any form of extreme sport, old skool hip hop, riding your bike downhill really fast, riot grrrl, those boys you want to kiss but punch in the face at the same time, dyeing your hair ridiculous colors just because you can, stitch 'n' bitch, the songs that make you dance, the songs that make you cry, being a bad ass, cake, love, death, and everything in between.

I was kind of in a reading slump after I finished my exams, and this was the perfect book to bring me out of that slump. This was a really unique and cute contemporary that is one of the best contemporary novels I've read this year.

I loved the cover. The orange and white, just like blogger, really tied in well with the Internet / blogging theme of the novel. I usually really don't like covers with people on them as they take away from the reader imagining the characters for themselves, but I feel that the models nailed the look of both Jeane and Michael.

Something I really liked about the novel was the main characters,- Jeane and Michael. I thought they are very unlike other protagonists. They are both very flawed characters and I think this is why I enjoyed them even more. Jeane Smith is a blogger- she blogs about most things from fashion to her opinions on topics that would be unusual for a teenager to be so concerned about. Jeane is also a very judgemental character. She praises people who are different but also isolated herself from others at school because she feels she is above them . [SIDE NOTE: Did anyone else think Jeane kind of reminded them of Tavi Gevinson ? ]

Michael is a very popular guy in school. He is a member of the football team, gets good grades and is all round well liked. He is a really sweet and caring guy. Yet there is also faults within him. He is also very judgemental and dismisses Jeane, at first, as being a bit of an oddball and a loser. He also thinks very highly of himself, especially when it comes to the female gender.The character development for both characters was flawlessly written and executed. It was really interesting seeing Jeane and Michael relationship go from hate to something a little more affectionate and intimate. The relationship between them was written in such a realistic way. In a lot of YA books they tend to fluff over the details to create and idealistic romance, but Sarra Manning doesn't shy away. She shows the gritty as well as the pretty bits of the relationship.

I really enjoyed the writing style of the novel. Sarra Manning is an author known to me. I've read Pretty Things and Let's Get Lost a few years back and really enjoyed them. I was not disappointed with this novel. Sarra writes such realistic teenage characters that really reach out the the reader.I also thought the minor characters were really well done, like Michael's family, Jeane's father etc., I liked the messages sent through this book, with regards to feminism, modern technology, stereotypes etc,. The dialogue of the book was also amazing and made me laugh many times when reading it. I felt really connected to the book, I felt all the feels.

Overall, a contemporary read that pack a punch and delivers a powerful message along with its adorable romance.