Review: A Storm of Swords (#3) by George RR Martin 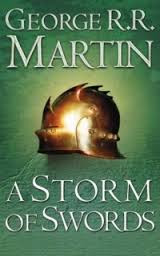 
Of the five contenders for power, one is dead, another in disfavor, and still the wars rage as violently as ever, as alliances are made and broken. Joffrey, of House Lannister, sits on the Iron Throne, the uneasy ruler of the land of the Seven Kingdoms. His most bitter rival, Lord Stannis, stands defeated and disgraced, the victim of the jealous sorceress who holds him in her evil thrall. But young Robb, of House Stark, still rules the North from the fortress of Riverrun. Robb plots against his despised Lannister enemies, even as they hold his sister hostage at King’s Landing, the seat of the Iron Throne. Meanwhile, making her way across a blood-drenched continent is the exiled queen, Daenerys, mistress of the only three dragons still left in the world. . . .
But as opposing forces maneuver for the final titanic showdown, an army of barbaric wildlings arrives from the outermost line of civilization. In their vanguard is a horde of mythical Others--a supernatural army of the living dead whose animated corpses are unstoppable. As the future of the land hangs in the balance, no one will rest until the Seven Kingdoms have exploded in a veritable storm of swords.


This is the third book in George RR Martins highly acclaimed A Song Of Ice And fire series. I now understand why people say they think this is the best book of the series. There was so much development in this book and I feel this book really contributed to the plot of the series and tying up a few of the loose ends in the series.

First things first, the characters. The characters of George RR Martins ASOIAF series are always beautifully written and complex. In this series there are never characters that are all good or all bad. No one is completely black or white but a whole lot of grey! The characters are so complex and have so many sides and that really adds to the entertainment factor of the series.

There was a lot of development for the characters of this book. New chapters introduced from the perspectives of Jaime Lannister and Samwell Tarly really gave the reader a good insight into the thoughts, feelings and reactions of these characters. I felt this gave us a deeper look at the characters for themselves and also a better understanding of them gained from their own thoughts and feelings rather than the thoughts of other characters. For example, Jaime is a character I loathed entirely but through his POV chapters we start to learn more about him, his past and his thoughts rather than basing our feeling for him on the words of his enemies.

I actually really enjoyed Jaimes chapters as we got to see a more pleasant side to his character. Samwells chapters were great as he really evolved and developed as a character to more of a brave man. I really enjoyed the story arcs for the characters in this book, especially Jon, Arya, Sansa. I loved to hate Tywin Lannister in this book, he brought a lot to the book. A character I didn't really enjoy was Bran. I felt his chapter were a little boring and slow. Tyrion Lannister is still a favourite for me, like you even had to ask ! And Brienne and Ygritte- loved them so so so much !

The plot of this book was really well paced. In the first half of the book, the pace is steady with a few twists thrown in for good measure, but once you hit the second half of the book the real plot twists begin to emerge. The plot of this book is a lot more front line action, where as in A Clash Of Kings the plot was a little more behind enemy lines. There was still the scheming and plotting side of the plot but I felt it was well worked in among the action side of the book.  There were so many twists and turns in this book that I felt like this for a long time :

I encountered a few spoilers for the book in the Internet, so some of the plot twists were not so shocking but there were so many twists and turns in this book that a lot of them were unexpected. I felt myself lost in the book because each plot twist would leave me even more desperate to read more of the book. There was a lot of deaths in this book... I'm still not really over the death of Ned Stark from book one so my heart was crushed after this. [Tweet me at @Shannonbookworm and use the hashtag #StillNotOverNedStark !]

George RR Martins writing style is so amazing and awe-inspiringly creative . He has created a bunch of confident, unique, life-like characters that are so complex. The antagonists of the series are so devious and cruel that you become so invested in the series to see if karma will deal them a bad hand. The protagonists of the story nestle into your heart and you fall in love with them and never want anything bad to happen to them ever.

His world building skills are flawless. He has created a vivid world that some people have not read the likes of since Harry Potter and Lord Of the Rings. From Kings Landing to The Wall and beyond, the reader is so familiar and immersed in this world that they almost can see it. I really loved the creativity seen in the journey beyond the Wall. The Others and the Wildlings really add to the storys fantasy element and were some of my favourite parts of the book. His writing is easy to read, has a great poetic flow and really captures the imagination. He kept me hooked to the last word on the last page.

A breath taking fantasy novel that I would recommend in a heartbeat.

Posted by Shannonbookworm at Saturday, July 13, 2013