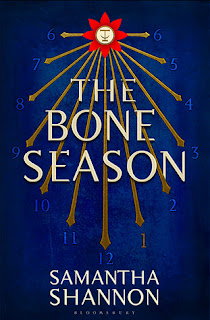 Blurb: It is the year 2059. Several major world cities are under the control of a security force called Scion. Paige Mahoney works in the criminal underworld of Scion London, part of a secret cell known as the Seven Seals. The work she does is unusual: scouting for information by breaking into others’ minds. Paige is a dreamwalker, a rare kind of clairvoyant, and in this world, the voyants commit treason simply by breathing.
But when Paige is captured and arrested, she encounters a power more sinister even than Scion. The voyant prison is a separate city—Oxford, erased from the map two centuries ago and now controlled by a powerful, otherworldly race. These creatures, the Rephaim, value the voyants highly—as soldiers in their army.Paige is assigned to a Rephaite keeper, Warden, who will be in charge of her care and training. He is her master. Her natural enemy. But if she wants to regain her freedom, Paige will have to learn something of his mind and his own mysterious motives.

I was sent this book in exchange for a honest review by Easons. I was so excited when I received this as I  had heard a little hype around the book reviewing community, especially booktube. I loved the caption on the front of the proof too: "Welcome To Scion. No Safer Place".  Samantha Shannon, the author of this book is on Twitter. Follow her @Say_Shannon.

I devoured this chunky ARC in about 3 days. It probably would have been less but I didn't have as much time to read. The characters of the book was one of my favourite things about it. Our protagonist, Paige, is a clairvoyant, or "voyant" and has lived most of her life knowing she was different than other girls. She is one of the most rare types of voyant known. She is a "dreamwalker" which allows her to enter other voyants and humans aether / dreamscape. I really liked the character of Paige. She was a bright girl, who was very compelling and strong. Although sometimes I did want to shake her for being silly, I did think it was the flawed and vulnerable sides to her character that made her so compelling. I enjoyed her narration of the story.

Warden was my favourite character in the entire novel- Seb being second of course. Warden is a Rephaite, an alien species that take Voyants in as slave soldiers in their abandoned town of Oxford. Warden was a little tough to know at the beginning of the story but once he tried to get to know Paige and help her, I started to warm to him. I loved watching his relationship slowly grow with Paige and I was full of feels by the end of the book as I think Warden / Paige has become my latest OTP. Warden was a three dimensional character as you could see his weaknesses and flaws and vulnerability as he got closer to Paige . His warm and loving side was also exposed as his relationship developed with Paige.

So many other characters were amazing but I think I'll be here forever if I dedicate a paragraph to each of them, so I'll try to be concise. Paige's gang were good characters but I felt there should / could have been more development or back story with them- especially Jaxon. Julian & Liss are my other shipping couple from the book. I loved their characters as side characters. Seb was just amazing. I welcomed him into my heart only 60 pages in. Nashira was also one of the best characters- but not in the way you may think. I loved her character as she is one of the best villains I've read in a long time. She was power hungry, devious, evil and manipulative...everything a good villain needs. I can't wait to see more from the characters in the second novel.

The plot was quite good. I felt the book got off to a little bit of a slow start. I wasn't immersed into the story until a good 60 / 70 pages into the book. I enjoyed the way the plot moved sometimes between present day situations and memories / flashbacks. The plot was very fast paced as the reader was brought on the journey with Paige to find out more about Rephaites, Voyants and escaping the slavery of Oxford. The monsters of the book , or the "Buzzers" were also an interesting addition to the novel which resulted in a very action packed and pulse pounding scene. At one point in the novel I felt myself falling into a rut. I didn't feel captivated by the story and felt that the book was boring for five pages until the end of the chapter where something dramatic would happen just to make the reader continue. Luckily this rut of boredom lasted only 40-60 pages and I persevered and completed the novel.

One of the things that intrigued and shocked me the most was the realization that Samantha Shannon is only a little less than 4 years older than me. This filled me with a little confidence that maybe someday I can write a novel as good as she has. We also have a very similar name which is also cool.

Samantha Shannon's writing style is vivid and clever. She uses language in a colloquial but compelling way, which is a joy for the reader. Her conversational writing skills are very good, with just the right amount of witty / sarcastic remarks- mostly from Paige's end. Her setting is very vivid and I can still picture each setting from the Citadel, SciLo, the Dials , Oxford and many other places featured in the novel.This book also has maps at the beginning to increase the vividness of each setting- also us bibliophiles (book lovers) do heart books with maps!

One thing I disliked was that while reading this book I had to have my laptop beside me. I needed it as the many different types of Clarevoyancey were not explained. As I read about people being Cartomancers and Soothsayers, and often times wondered what my Voyant power would be, I had to use Google to find the meaning of the voyancey. I found this really annoying and would have preferred the guide at the beginning of the book to be a little more specific and to have defined each voyancey.

I also enjoyed the references to Ireland in the book. Being an Irish person I really found it interesting seeing Samantha Shannon envision how the Irish would react to this Scion government . I have to say, she must of done her research, as she captured our rebellious and riotous nature.

Overall I enjoyed the book very much but I did not love it. I would definitely recommend it to you if your looking for a good paranormal romance / dystopian set in London...or some bookshelf candy as the cover is gorgeous! This is also the first in a seven part series, I don't think I need to say that I am excited for the second books release.

Check out the Fansite Here.

Posted by Shannonbookworm at Sunday, August 18, 2013