Review: The Rig by Joe Ducie 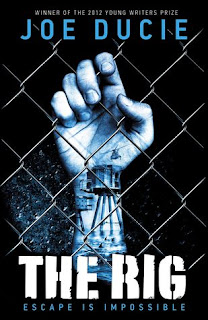 Plot: Fifteen-year-old Will Drake has made a career of breaking out from high-security prisons. His talents have landed him at The Rig, a specialist juvenile holding facility in the middle of the Arctic Ocean. No one can escape from The Rig. No one except for Drake...
After making some escape plans and meeting the first real friends of his life, Drake quickly realises that all is not as it seems on The Rig. The Warden is obsessed with the mysterious Crystal-X - a blue, glowing substance that appears to give superpowers to the teens exposed to it. Drake, Tristan and Irene are banking on a bid for freedom - but can they survive long enough to make it? Drake is an action hero to rival Jason Bourne and the CHERUB team in this debut author's fantastically imagined sci-­‐fi nightmare.

I was actually jumping up and down with joy when I received this book for review. One look at the cover and the blurb and I knew it would be unlike any other book I'd read before. Thanks again to Hot Key Books for sending me the novel ahead of publication in exchange for an honest review.

Firstly I'd like to say that I was a little disappointed with the novel. I did enjoy the book but there were aspects that I felt left the novel feeling and reading a little flat. Let's discuss the characters in the novel. Immediately, I liked Will Drake, commonly referred to solely as Drake in the novel. He is the protagonist of the story and was a very unique character. I thought he had both good and bad qualities, he was quite flawed, but was overall a really enjoyable character. He was very brave and courageous and had a very quick mind.Doctor Lambros was one of my favourite characters too. Other characters in the book, such as Warden Storm and Officer Hal, were characters I loved to hate. They were villains done right. I really do enjoy a good evil character now and again.

I did have a little bit of a problem with some of the other characters. I felt like Tristan had an interesting past with his ex roommate storyline and his backstory but I didn't feel that they developed his character in anyway. Tristan was a shy boy who did grow a little into a more confident boy but I felt a little like his character was just skimmed over and not really engaged with. The same goes for Irene. I felt Irene could have been an amazing character and could have been used to add so much more to the plot of the novel. I did like the way we learned little about her at a time, but I felt it was too little. I did come away from the book feeling like I didn't really know these characters as well as a reader should.

The plot of the book was very high action. I have never read a book with a prison setting or a prison break type of plot. I really liked the way the prison added to the plot of the book and felt
the prison really added a lot of different dynamics to the plot itself. I did feel the plot was fast paced but at times I felt it to be a little too fast paced. Sometimes I would read a chapter and there would be a small twist thrown in at the end of the chapter, for the purpose I felt, to keep the reader reading. These twists were sometimes a little disappointing and obvious but I still liked the plot.

The writing style of the book was enjoyable. I feel that Ducie created a great setting for the novel. The prison setting and the surrounding sea really made for a vivid image for the reader. I felt the writing style could be a little repetitive at times and not as descriptive in action scenes as I would have liked. I did think that Joe Ducie created some good plot arcs and thought up a very creative and unique plot.

Overall, I really did like the novel but I was a little disappointed in the presentation. The plot is a very good idea but I felt it could have been executed a little better. Although if a sequel is released I will definitely pick it up as I feel this book could have been a little off as it is setting up for an even better sequel. If you've read The Rig, please comment below and let me know what you though!

Three and a half stars

Posted by Shannonbookworm at Wednesday, September 04, 2013