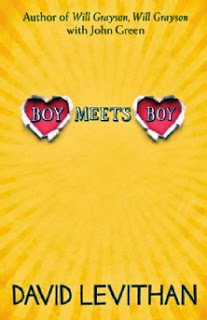 Blurb: This is the story of Paul, a sophomore at a high school like no other: The cheerleaders ride Harleys, the homecoming queen used to be a guy named Daryl (she now prefers Infinite Darlene and is also the star quarterback), and the gay-straight alliance was formed to help the straight kids learn how to dance.

When Paul meets Noah, he thinks he’s found the one his heart is made for. Until he blows it. The school bookie says the odds are 12-to-1 against him getting Noah back, but Paul’s not giving up without playing his love really loud. His best friend Joni might be drifting away, his other best friend Tony might be dealing with ultra-religious parents, and his ex-boyfriend Kyle might not be going away anytime soon, but sometimes everything needs to fall apart before it can really fit together right.

This is a happy-meaningful romantic comedy about finding love, losing love, and doing what it takes to get love back in a crazy-wonderful world.

This novel is set in a utopian, perfect society in which people do not discriminate over peoples sexuality or sexual orientations. The high school in the novel is one where people can be themselves, without judgement. It is essentially the opposite of what high schools are like now. The setting was really perfect and unique. In the town there was no homophobia or bullying. The setting was really very unique and memorable. The town was also very well created. I think that the way the setting was so "perfect" and fantasy like, it really showed the reader how bad our world is now in comparison.

The characters of the book were good. I'd heard a lot of people saying that the characters of the novel was their favourite aspect. For me, I would have to disagree. I found the character to be, although they were very unique, a little boring. The characters in it were not afraid to be themselves, and I did like the message that sent to the reader. The main character Paul could sometimes be so intelligent on one page and then would go and make an idiotic mistake on the next. For me I thought he was really up and down and I didn't enjoy his character. I liked the character of Noah, but at times I felt he was a little cliched.

Some of the more minor character were the ones that really stood out for me. Infinite Darlene was probably my favourite. Darlene, previously known as Daryl, is a 6 ft 4 quarterback on the schools football team and is also homecoming queen. She is also the schools infamous drag queen. I felt that her character really added to the story as she was always clued in on the fresh gossip, and it was this gossip that contributed to many of the plot twists.

The plot of the novel mainly centred around Paul's life, his relationships with his friends and romantic relationships and the way his town was. The plot moved a little slow at times but it was pretty good in parts. I liked the way some chapters would end and I would feel this feeling of ease and completion, where as other chapters could end on a twist. I really didn't like the ending as I felt it was a little too "obvious" for me.

One of the best plot points in my opinion was the life of Paul's friend Tony. Tony is one of Paul's best friends in the novel and I loved reading about their friendship, but Tony doesn't live in the same town Paul does. Tony lives in a place a little closer to our world today. A place where ignorance and religion cloud the minds of adults and other people to homosexuality. Tony is gay, but can't tell anyone in his town about it. He feels really trapped and claustrophobic and it was sad to read about. I think it was implied that Tony felt suicidal at one point or another too. His parents are very homophobic and it was really an interesting read to see how their relationship develops with their son once they learn he is gay. It's safe to say Tony was my favourite character of the book.

"This is my life, I think. I am an accumulation of objects."

"A note is an update or an entertainment. A letter is a giving of a part of your life- an insight into your thoughts beyond mere observations. "

Please recommend me some of your favourite LGBTQ novels.