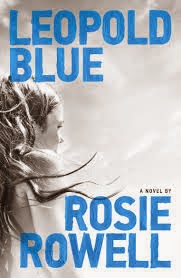 Blurb: Meg Bergman is fifteen and fed up. She lives in a tiny town in rural 1990s South Africa - a hot-bed of traditionalism, racial tension and (in Meg's eyes) ordinariness. Meg has no friends either, due largely to what the community sees as her mother's interfering attempts to educate farm workers about AIDS. But one day Xanthe arrives - cool, urban, feisty Xanthe, who for some unknown reason seems to want to hang out with Meg.
Xanthe arrives into Meg's life like a hurricane, offering her a look at a teenage life she never knew existed. But cracks quickly begin to show in their friendship when Meg's childhood friend Simon returns from his gap year travels. LEOPOLD BLUE is an emotionally taut and beautifully-written story from a debut author with a mesmerising voice

I received this book in exchange for an honest review from the publisher, Hot Key Books.

This was my first read for the Bout of Books 9.0 readathon, if any of you readers are also doing it, please tweet me @Shannonbookworm and I'd love to chat! I'm really enjoying the readathon so far.

This book was different to what I had expected before reading it. I really was not the book I had expected. The book delves into the problem of AIDS and HIV at the time of the novel, 1990's. I felt I learned some things about the ignorance of people to AIDS and how hard it was to educate people in a place against change. I felt the book had a lot to offer historically, but it did not overwhelm you with facts. The historical and political aspect was gently woven into to the story which I really enjoyed.

The characters were so-so for me. I felt that the characters read as if they were a little flat. The only character I felt that was a little more deeper than surface level was our protagonist Meg, but she only began to develop as a character very close to the end of the novel. I really disliked Meg's character. As with her character, I felt the teenagers in the novel were very stereotypical in their actions and that they came across as very hollow and flat characters.

I felt that the writing style was good but not great. I think Rosie Rowell has captured the heart and soul of her setting of South Africa. She surrounds the reader in this rich setting of change, violence and ignorance of the time. I loved the setting as it was so well written. I did not like the dialogue of the novel and felt that at times, it left a lot to be desired. I also felt that there should have been more descriptive language in the novel.

Overall a good novel with a great setting. If you are interested in south Africa or the topic of AIDS definitely pick this one up. Also a good book for contemporary fans who want to read about toxic and fake friends.