Review: No and Me by Delphine de Vigan 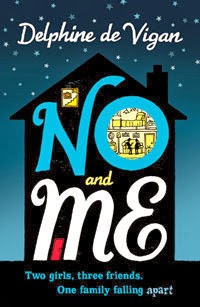 Blurb: "All my life I've felt on the outside wherever I am, out of the picture, the conversation, at one remove, as though I was the only one able to hear the sounds or words that others can't and deaf to the words that they seem to hear. As if I'm outside the frame, on the other side of a huge, invisible window.

But yesterday when I was there with her, I'm certain that you could have drawn a circle around us, a circle I wasn't excluded from, which enclosed us, and for a few minutes, protected us from the world."At thirteen-years-old, with an unusually high IQ and a knack for observing things about other people, Lou Bertignac is not only the youngest in her class at school; she is also the most unusual. Painfully shy, she has few friends, save for Lucas, whose company helps her get through each day. At home, Lou's life is also difficult: Her mother hasn't left the house in years and her father spends his days crying in the bathroom. Lou's world is dark and sad... That is, until she meets No.No is a teenage girl that Lou befriends for the purpose of her school project on homelessness. Despite the different worlds that these two girls come from, a friendship is soon forged between them. Unable to bear the thought of No not having a home or a family to keep her safe, Lou persuades her reluctant parents into letting her new friend stay with the Bertignac family. No's addition to the household forces Lou and her parents to face the sadness that has been enveloping them for so long — but not without some disruptions along the way.

I was really excited to see this book in my local Oxfam for one euro because Hot Key Books had just announced it was their book club book for January. I was so eager to start into the book.

One of the things that made me fall in love with this book was how unexpectedly thought provoking it was. It really opened my eyes to how rampant homelessness is. It has become an increasing problem, especially in today's economic climate. The novel really makes you think about how good a life you have, and also about how even the little things we can do could make the biggest difference for someone else. The novel also gives the message that no matter how hard you try to change someone, they will always be themselves.


The characters were so three dimensional in this book. They really stepped off the page and into my heart. Our protagonist Lou is an introverted, outsider. She has no friends at school and rarely tries to change that. She sits in her room and conducts diy science experiments while avoiding her absent parents. Her relationship with her parents was really interesting to read about and was one of my favourite aspects of the novel.

No, the homeless girl Lou takes in, was such a vibrant character. She is so very flawed but she also very real. I loved her relationship with Lou, first looking up to Lou entirely and then Lou becoming motherly to her. She was really a destructive character from the onset, ordering glasses and glasses of vodka when she and Lou would meet. I enjoyed her friendship with Lou very much. It was very heart warming.

The writing style of the book was amazing. I'd heard the book was translated from french to English and that made me a little worried that the book would read in a very disjointed and grammatically incorrect manner. I was pleasantly surprised when the writing style turned out to be incredibly beautiful and poetic. I loved the vivid descriptions and metaphors and really felt they helped me connect to the novel.


“Some secrets are like fossils and the stone has become too heavy to turn over.”


Although I found some faults with the book, the ending was not satisfactory for me at all, I did really enjoy the book and would read it again. Please check out the book for yourself and let me know what you thought. Check out Hot Key Books twitter @HotKeyBooks to see their latest.