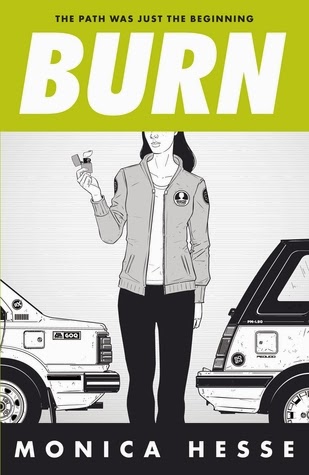 Plot: Lona Sixteen Always is about to become Lona Seventeen Always, but she isn't feeling much older or wiser. Unlike Fenn and the rest of the Path strays, she is struggling to move on with her life. How can she look to the future when she knows almost nothing about her past? Lona feels like everyone's pressuring her to become 'normal' - even her beloved Fenn - and on top of this, she's been having strange, violent dreams. It almost feels like someone's trying to send her a message...
Lona's dreams turn out to be memories - clues hidden inside Lona by her mother, who Lona always assumed was lost to her forever. But she isn't lost at all: she's being held captive by Harm - emotionless, psychotic, murderous Harm - and she's desperate for Lonato find her. But can Lona work it all out in time? And why does Harm need Lona's mother? In the bid to find out who she really is, Lona will fall headlong into a trap far more dangerous and cunning than she could ever have imagined. The Path was just the beginning.

A huge thank you to Hot Key Books for sending me a review copy of this book. If you want to see my review of the first novel in the series, Stray, Click Here.

After the explosive ending of Stray, I was really looking forward to diving into this novel. Although I felt a little disappointed that this book didn't surpass Stray, I did really enjoy it.

The novel picks up six months after the events of Stray and we see how those events have changed the characters lives and emotions. I really enjoyed seeing that the group were still a group and the way they interacted with each other was still close. I liked seeing that they had become close with Talia and didn't blame her for any work on the Julian Path.

I really enjoyed learning about the Julian Path a little more. I'm really intrigued by the workings of the Path and how it came to be . I am also really interested in finding out more about Julian himself as he still seems mysterious to me. I really like that we haven't been given too much information about Julian or Path yet, as I think if we were given the information all at once it would be too powerful. I enjoy the way it is spread out over the series.

I really love the theme of questioning what "normal" means that lies beneath the surface of the book. I found the book to be really though provoking, as was Stray. It has made me stop and think and question my own morals if I were in a situation as Lona finds herself in.

One thing I did not like about the book was that I felt the POV's transitions were not as smooth as they were in Stray. I sometimes felt they were a little jumpy and uneasy.

I loved the dreams / visions aspect of the novel. I found it to be really entertaining and gripping. It added to the sci-fi quality of the novel and had me guessing the meaning behind them until the very end of the novel.

Overall I really enjoyed this novel, and if you liked Stray, I would definitely recommend you pick up Burn. Fingers crossed for a third book!