Review: The Illusionists (#2) by Laure Eve 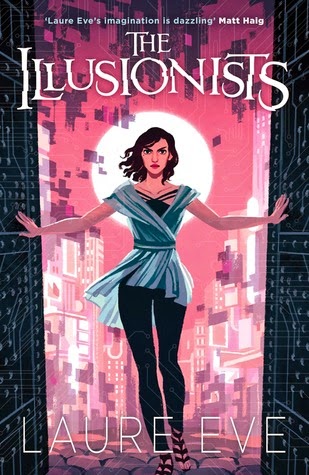 
Blurb:   A shocking new world. A dangerous choice. Two futures preparing to collide...
Having left White behind her in Angle Tar, Rue is trying to make sense of her new and unfamiliar life in World. Its culture is as baffling as is it thrilling to her, and Rue quickly realises World's fascination with technology can have intoxicating and deadly consequences. She is also desperately lonely. And so is White. Somehow, their longing for each other is crossing into their dreams, dreams that begin to take increasingly strange turns as they appear to give Rue echoes of the future. Then the dreams reveal the advent of something truly monstrous, and with it the realisation that Rue and White will be instrumental in bringing about the most incredible and devastating change in both World and Angle Tar. But in a world where Life is a virtual reality, where friends can become enemies overnight and where dreams, the future, and the past are somehow merging together, their greatest challenge of all may be to survive.

This was one of my most anticipated releases of this year because of how much I enjoyed the first book in the series, Fearsome Dreamer.  A big thank you to Hot Key Publishing for sending me a review copy !

The novel picked up a little after the end of the events in Fearsome Dreamer. I felt the novel began with a great spurt of enthusiastic action and suspense. The plot centred more around Rue, and her life in World. I really enjoyed reading about the relationships between Wren, Rue and White and how they all were connected. The mysterious and ominous dream place of the "Castle" was so interesting to read about and I really enjoyed the plot twists it provided.

The plot of the novel was really fast paced and kept me on the edge of my seat. There were so many twists and turns in the plot that I did not see coming at all. I really enjoy the dream and clairvoyance aspect to the novel. I think it makes it so much more interesting and unique than other sci-fi and fantasy novels out now. The pacing of the novel was perfect, giving just enough information out at a time. I really dislike novels that give out too much info at one time because it doesn't read well. There were a few twists, one in particular at the end of the novel, that I am still reeling over.

I did have a few problems with the newer characters in the novel, such as Sabine, Cho, Livie, etc., I was excited with the introduction of these new characters but felt they ended up feeling a little bland and two dimensional when I finished the novel. I felt they slowed the plot a little as although I found them interesting at first, I lost interest in them by the end.

The other characters in this novel were good, but I felt there was not as much character development as seen in the previous novel. Rue's character did develop. I felt she changed so much from the young and naive girl she was in Fearsome Dreamer, as she began to grow up and lose her childish and stubborn nature. She stopped running from her problems and realised the only way to fix her problems was to face them .

I loved the development in her relationship with White, and also Wren. I felt that although the novel was in three POV's, Rue's , Wren's, and White's, the novel was mostly told from Rue's point of view. I really liked the development of Wren's character also. He was much more of a deeper and three dimensional character than I had previously thought in the first book. Although I loved the development of Wren's and Rue's characters, I felt White's did not develop much more than him being more honest with himself and allowing himself to go for what he wanted in life.

Laure Eve's writing style is phenomenal. Her creation of such an outstandingly unique plot and group of characters had me gripped from the first page of the first novel. Her vivid imagination is obvious in how vivid the settings are in the novel, from Angle Tar to World to the Castle. Laure's prose and writing style makes the novel flow and leaves the reader swimming with quotes from the novel. Laure Eve's creative ability is outstanding and I eagerly await any other novel she writes in future.

Overall, I highly recommend the series to fantasy fans, although fair warning this novel is for the older ones as it contains mild scenes of a sexual nature.