City Of Glass by Cassandra Clare 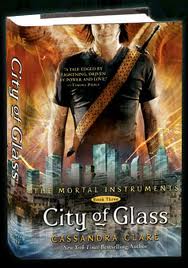 To save her mother's life, Clary must travel to the City of Glass, the ancestral home of the Shadowhunters -- never mind that enter-ing the city without permission is against the Law, and breaking the Law could mean death. To make things worse, she learns that Jace does not want her there, and Simon has been thrown in prison by the Shadowhunters, who are deeply suspicious of a vampire who can withstand sunlight.
As Clary uncovers more about her family's past, she finds an ally in mysterious Shadow-hunter Sebastian. With Valentine mustering the full force of his power to destroy all Shadow-hunters forever, their only chance to defeat him is to fight alongside their eternal enemies. But can Downworlders and Shadowhunters put aside their hatred to work together? While Jace realizes exactly how much he's willing to risk for Clary, can she harness her newfound powers to help save the Glass City -- whatever the cost?

Clary, in my opinion, really matured in this book. She sort of grew into and learned to accept her Shadowhunter identity. She learned to accept her love for jace and she is one of my favourite female heroines! Although, she made some decisions that I did not agree with , I overall enjoyed her character.

Jace is always awesome. He is so brave, valiant, and loyal towards Clary and the Lightwoods. I also love his witty and sarcastic nature.

I really liked Simon in this book. The whole "becoming a vampire" thing really works for him. He has become a better character since his transformation. I would love it if he got with Maia or Isabelle.

Alec and Magnus are some of my favourite characters in the series, and also one of my Favourite couples! I loved that Alec manned- up and showed everyone his feelings towards Magnus . I just love them so very much.

Sebastian, I liked him in the beginning. I thought "Oh, here's a nice guy that Clary can be with!" boy, was I wrong! He was evil, so evil! He is my new love to hate villain of This series! Well, you know what they say, don't judge a book by it's cover!

The plot picks up from where we left off in City Of Ashes, and can I just say that the plot of this book may be  my favourite of the series so far! The plot was fast paced and I literally walked around with this book, not letting it out of my sight. I re-read my favourite scenes and lines. It was action packed, and the battle and action scenes were so vivid  and awesome. The Mortal Mirror and The Mortal Instruments came into play in this novel and I really enjoyed that. So did the Angels, and I really liked this because I sometimes feel that with the romance side of the book, you sometimes forget about The Mortal Instruments and their actual mission!

Cassandra Clare writes really awesome books, can't wait to check out the Infernal Devices series. She writes the most believable and realistic dialogue scenes, that really add to the book and the characters. Her world building, Character building and the whole shadow hunter thing is phenomenal! It is so unique and interesting.

She writes every chapter with a cliffhanger to keep you interested, which is a big bonus point for me, I love that! Every book ends on such a "What will happen next" note, that you immediately want the next book NOW! I am so happy this is not the end of the series, as I really want to see more of the characters in the next few books

Posted by Shannonbookworm at Wednesday, July 11, 2012