Harry Potter & The Order Of The Phoenix 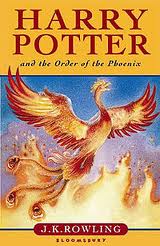 Plot: (Y'know, just in case some of you have been living under a rock and don't know what this book is about!!)
There is a door at the end of a silent corridor, and it's haunting Harry Potter's dreams. Why else would he be waking in the middle of the night, screaming in terror?
Harry has a lot on his mind for this, his fifth year at Hogwarts: a Defense Against the Dark Arts teacher with a personality like poisoned honey; a big surprise on the Gryffindor Quidditch team; and the looming terror of the Ordinary Wizarding Level exams. But all these things pale next to the growing threat of He-Who-Must-Not-Be-Named — a threat that neither the magical government nor the authorities at Hogwarts can stop.
As the grasp of darkness tightens, Harry must discover the true depth and strength of his friends, the importance of boundless loyalty, and the shocking price of unbearable sacrifice.

Review... (a mini one that is!)
I really enjoyed this book. Every time I read a HP book I feel like I am falling into rhe world so easily. This book was really good. I liked that there was more Dobby in it than we see in the film. It was so sad to read about Harry feeling so isolated. The scene about Harrys dad bullying Snape was quite sad! At first, I though Harrys dad seemed really mean, but a friend told me there is more to be found out there.... Also Snape , there was no need to call Lily a Mudblood?! I mean, what ? You didn't need to say that. I loved all the Dumbledore's Army scenes. Cho...ugh *blood boils* she annoys me -.-
One part I didn't like was, but didn't like I dont mean I didn't think it was well written, Sirius' death. OMG , I didn't cry because I'd already known it was going to happen...y'know from the movies (yes I watched the movies before the books *ashamed*).  But it was so sad! The ending of the book was quite good. I Really want to finish reading the series before the end of this year. I'm thinking of making a yearly tradition, like many people do, to read the books once a year.
Obviously Gave this a 5/5 star rating
* * * * *

So guys, what did you think of this book? Do you read the Hp books once a year? Let me know in the comments below!
Posted by Shannonbookworm at Saturday, October 06, 2012