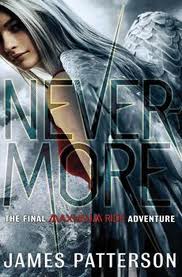 PLOT- Maximum Ride and her faithful friends stand ready to face the two greatest threats that humankind has ever known--now combining forces in an unbeatable plot to destroy life as we know it once and for all. And this time, the enemy truly can't be stopped.

The danger mounts just as Dylan has finally worked his way into Max's heart--and just as her beloved Fang unexpectedly returns to the flock. An explosive confrontation between the two boys with a claim to Max's heart ensues, and the entire world hangs in the balance.

In this powerful and moving finale to James Patterson's epic fantasy series, fans will finally get the answers they've been waiting for--and an ending full of shock, surprises, and the greatest conclusion you never saw coming.

Review- **This Review WILL Contain Spoilers. You Are Warned**
I just finished Nevermore and it was an epic conclusion to the Maximum Ride Series. I am a little sad that the series is over as it was one of my favourites but now I'm excited to maybe pick up Pattersons other series' such as Daniel X and Confessions Of A Murder Suspect . Also Patterson, man do you write books so fast. It almost seems he has a new novel out every other month!

This book had reminiscent of The Angel Experiment. A lot of reminded me of that novel and I think that added to my enjoyment. The twists and turns were breathtaking and the majority of them I did not see coming. Lets Talk about some of these :
1) Dr. Martinez being a White Coat- well, sorta. Turns out she was under Jebs evil mind control but guys, I almost cried in sympathy for Max. I mean Martinez has been so loving towards Max and has made her her feel normal, like she belongs. Then when she was at the School with Angel, my brain almost exploded. Thank god it was just mind control..
2) Ari's Resurrection- I mean, woah. I was in no way expecting that! At first I was like WTH, how is Ari alive and then he revealed he was just a clone and I was like ah, I see. I was hoping he would have been on Max's side and they could have had a normal, well normal for them, sibling relationship. But no. I was sad when he was evil...and I think he died in the end..Not really sure because that ending was so confusing.
3) Maya (Max II) Death- at first I was like OMG NOOO! but then I was like, well maybe Fang and Max can get back together now. And I never really liked her anyway. But it was heartbreaking reading Fang being so upset over her death.
4) The biggest of all twists, (AKA the answer to the Question all Maximum Ride fans have been asking since book 1.)- The reveal of the Voice. I in no way suspected that the Voice was Angel. I mean wow, Angel, really? At first I was like, heh Patterson...um..is this a joke? But then I thought about it and I was like, you know what? That kinda does seem to make sense. When I read that it was her I put down my Kindle and just sat there thinking for a good 15 minutes. Such  a twist, applause Patterson applause.
The character development and the plot were all amazing . I actually started to like Dylan, I think it was because he wasn't acting all weird and singing. But my Otp (one true pairing) will always be Max and Fang. When they got back together , I was so happy. The plot was really fast paced and action packed- overall awesome.
I did have problems with the book, so I'll just get them over with quickly.
Firstly, How could Fang drop Ratchet and Holden, in the middle of nowhere, on their own? I mean what? Fang how could you abandon them there like that. And then when they found Paradise for all the "enhanced" mutants, why did you not go back for them or at least send someone to rescue them from the end of the world? I mean seriously, did they mean nothing to you? Were you that focused on Max that you "forgot" about your other flock?!
Secondly, I'm guessing the sewer kids are on the Paradise island...I mean you're not going to explain about what happened to them? No? Okay then.  Also what the heck happened to Mr. Chu ?! The last we seen of him he got his skin kicked off and he has a fishy lizard face... I mean are you not going to explain that Patterson? You're just gonna pretend it never happened? You're not going to explain where he is since he is still alive? No? Okay.
Also That ending. I mean that was a little confusing because now I am confused as to what happened to the normal people on the earth. I mean did they die from the toxin or the meteor or the earthquakes/volcano eruptions?
I know I've said some negative stuff just there but overall I really did like the book. I just felt it could have answered some of my questions and been a little less vague. Overall amazing book series, with a good conclusion.