Review: 172 Hours On the Moon by Johan Harstad 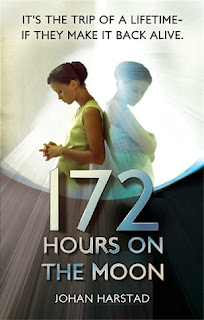 Blurb: It's been decades since anyone set foot on the moon. Now three ordinary teenagers, the winners of NASA's unprecedented, worldwide lottery, are about to become the first young people in space--and change their lives forever.
Mia, from Norway, hopes this will be her punk band's ticket to fame and fortune.

Midori believes it's her way out of her restrained life in Japan.Antoine, from France, just wants to get as far away from his ex-girlfriend as possible.
It's the opportunity of a lifetime, but little do the teenagers know that something sinister is waiting for them on the desolate surface of the moon. And in the black vacuum of space... no one is coming to save them.
In this chilling adventure set in the most brutal landscape known to man, highly acclaimed Norwegian novelist Johan Harstad creates a vivid and frightening world of possibilities we can only hope never come true.

I had heard a lot of hype, the good kind, surrounding this book before reading it. My expectations were really high as some of my most beloved booktuber gave it 5 / 5 star reviews. When I finished the book, I was left disappointed.

The pacing of the book is odd. There are parts of it that move at a snail pace with complete filler dialogue and no character development and then all of a sudden huge-action-plot-twist that will happen in a sentence. One thing that happened in this novel, this is something that always annoys me, is that there was a "nothing" chapter that ended in a one sentence plot twist / cliff hanger. I really do not like when authors do this because I feel it is just a ploy to make the reader keep reading so they can keep selling books. Also I feel it sometimes becomes monotonous and takes away the excitement of a cliff hanger. There were times when my excitement was heightened a little but not enough to make me enjoy the novel.

The characters of this book were not good. The book is written in multi-narrative, told from the point of views of our three teenagers in space- Midori, Mia and Antoine , and also an elderly man in a nursing home. Honestly I thought that the elderly man was the most fascinating of the three characters, and that is saying something as his chapters were only a couple pages long. I found it so very odd that these teenagers would not even be a little excited to go into space. I mean, hello? SPACE !! It's not everyday someone goes there. The reader knew they should not go, but they didn't. I also found it highly unlikely that the teenagers would not have to be put onto a vigorous training course for months to make them fit enough for space. Aspects of the novel were just too unrealistic for me, even in a science-fiction novel.

The plot of this book sounded so interesting from the back of the novel in the library. In fact, I found the plot to be, if I'm being honest, very bland. For me, I felt this book was nothing unique or special . It seemed like a very tired old plot that I'd seen in many movies on TV. I felt the plot could have been more descriptive and there was room for plenty more character development. Some of the mysterious aspects of the novel were not resolved by the end, which annoyed me.

The end of the novel was the only part of the novel I enjoyed. I had considered that ending happening but I didn't think Johan Harstad would go with that. I liked the ending and felt it was well executed. The epilogue at the end was good.

The style of the novel was a little confusing . The writing style really was not my cup of tea. I also felt that the mixed use of media in the novel did not go well with the novels story. There were many pages that were back and had space diagrams that had text almost too small to read. I did not enjoy these pages, which was odd for me as I usually enjoy books with pictures and different types of media.

Overall the novel was something I'd hoped to enjoy but didn't. A tired idea that wasn't executed in an exciting / different way. If you enjoy novels set in space, you may enjoy this.

Posted by Shannonbookworm at Wednesday, October 16, 2013

Email ThisBlogThis!Share to TwitterShare to FacebookShare to Pinterest
Labels: Action, bad review, Book Review, Didn't like, Half Star, hype, One star, Recommended to me, Sci-Fi