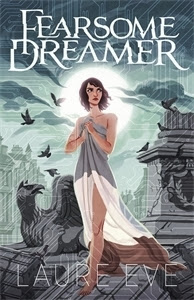 Blurb: There is a world where gods you’ve never heard of have wound themselves into hearts, and choice has led its history down a different path.
This is a world where France made a small, downtrodden island called England part of its vast and bloated empire.There are people here who can cross a thousand miles with their minds. There are rarer people still who can move between continents in the blink of an eye.These people are dangerous.And wanted. Desperately wanted.Apprentice hedgewitch Vela Rue knows that she is destined for more. She knows being whisked off from a dull country life to a city full of mystery and intrigue is meant to be. She knows she has something her government wants, a talent so rare and precious and new that they will do anything to train her in it.But she doesn’t know that she is being lied to. She doesn’t know that the man teaching her about her talent is becoming obsessed by her, and considered by some to be the most dangerous man alive ...

I was so excited when I received this novel for review from the lovely people of Hot Key Books, <Thank you! > . I was so enthralled by this novel. I know you can't see it in the photo, but the cover is amazing. There is a watermark effect of the cover that you can see when you tilt the novels cover in the light. I loved this novel.

This novel was really unique. I felt that the subject of dreams and clairvoyance is something I've really never read a lot of novels about or heard of many novels about it. The world of the novel was so unique, I could almost compare its vividness to that of the world building seen in George RR Martins A Song Of Ice And Fire series. The way the story weaves between dreams , world and Angle Tar is just amazing and done with such ease. The world and all its traits all felt so real that when I was reading, I felt as if I was walking along side the characters in the streets of the world, exploring it for myself.

The characters of the novel were so well developed and memorable. The characters, even the minor ones like Fernie, had stayed in my mind long after I finished the novel. The characters really connect with the reader , which was good as the novel is told in multiple point of views. I think White was my favourite character of the novel. I loved reading from his point of view as he had a very specific way of thinking about situations and very unusual mannerisms. I really liked the characters of Frith, Rue and many others. The relationships in the novel were so well written and I found myself wanting two characters to get together very much....but I will not say who they are because I do not want to spoil anyone.

The writing style was really very good. I felt the opening 60 / 70 pages were a little bland but once I got past them and hit the 100 page mark I was well and truly invested in the characters and the plot. I think that the writing was carried out with careful planning and plot twists. The ease of which Laure moved between character POV's (Point of View) chapters was very good. I also enjoyed the varying chapter lengths as it was fun to read a short chapter after a long one. I would just like to say that the novel does explore people's personal dreams, even the sexual ones, so if you are not over the age of 16 / 17, I would maybe not recommend this novel to you. The novel does carry itself well and I think that this could be a contender for making my list of favourites in 2013.

Also please go and follow the author Laure Eve on Twitter (@LaureEve). She is so lovely to talk to and very friendly. If you've reviewed this book, leave a link below and I'll check it out. Let me know if your looking forward to reading this book too.

four and a half stars
Posted by Shannonbookworm at Wednesday, October 02, 2013