Review: A Whisper of Wolves by Kris Humphrey 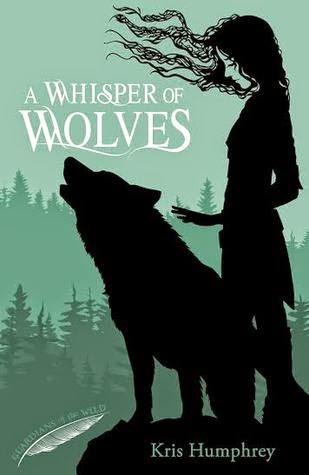 
Blurb~ When a raven drops a white feather at the doorstep on the day of your birth, it is a symbol of your destiny. You are a Whisperer – a guardian of the wild. After many years of peace in the kingdom of Meridina, rumours are spreading of a planned invasion – could the demonic Narlaw be returning from the darklands? It is up to the Whisperers and their animal companions to defend Meridina, protect Princess Ona and stop the Narlaw from destroying their world.
When hunters from her village disappear without a trace, Alice suspects that something sinister is at work. With the help of Storm, her wolf companion, Alice fights to save her village. The Narlaw are on the attack and it’s up to the Whisperers to stop them…

Thank you to those at Stripes Publishing for sending me this Advanced Readers Copy (ARC) of this novel months prior to its release. I also thought that the packaging it came in was one of the most unusual and cool I've ever received. The book was wrapped in tissue paper and tied into a bow with twine, with a wax sealed letter attached! The wax seal letter has taken pride of place nestled into my bookshelves where I will keep it forever!

This book would be perfect for children, both male & female, from the ages of 9 and up. The book will capture their imaginations and introduce them to fantasy and adventure.

The plot of this book is well paced and fun, especially for younger readers. I think the elements in this novel such as the journey, Alice's growth as a character and the idea of the Whisperers and their animal counterparts will draw in a child's imagination. I also think the fantastical elements such as the telepathic link between Whisperers and their beasts will appeal to all young readers with pets.

This novel is a really good one to spark an interest in reading in young readers as the plot is entertaining. The reader moves on the journey with both Alice and Dawn, two character providing dual perspectives in this novel. All characters in the novel will resonate with the young reader because of their strong presence and the vivid character descriptions create an image in the readers mind.

The writing style had great flow, good entertaining  dialogue and well paced plot. I would highly recommend picking this up of a niece, nephew, brother, sister or daughter / son that you think would enjoy a novel with adventure and animals.

Although I was in no way the target audience for this novel, I did enjoy it and feel that I would have enjoyed it as a child. I may check out the books to come in this series as they are released.

Posted by Shannonbookworm at Friday, March 06, 2015