Harry Potter & The Half Blood Prince by J.k Rowling 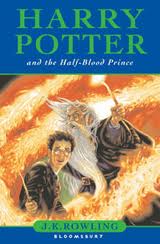 Plot: ( You know, for those of you who have never read the book or seen the movie..) It is the middle of the summer, but there is an unseasonal mist pressing against the windowpanes. Harry Potter is waiting nervously in his bedroom at the Dursleys' house in Privet Drive for a visit from Professor Dumbledore himself. One of the last times he saw the Headmaster was in a fierce one-to-one duel with Lord Voldemort, and Harry can't quite believe that Professor Dumbledore will actually appear at the Dursleys' of all places. Why is the Professor coming to visit him now? What is it that cannot wait until Harry returns to Hogwarts in a few weeks' time? Harry's sixth year at Hogwarts has already got off to an unusual start, as the worlds of Muggle and magic start to intertwine ...

Review: How can I not praise this book? J.k Rowling brings us deeper into the story of Harry and his importance in the wizarding world. I really enjoyed reading the book and I think I prefer the novel to its movie adaptation.
The characters in this book were great. Ron, Hermione, Harry, Ginny, Luna, Dobby etc., how can you not love them? The character development was brilliant in this novel. I really felt Ron and Harry mature from childish adolescents to more mature men in this novel. Harry toughens up a lot in this novel and the reader is brought along on his journey every step of the way.
I liked reading the little things that were not in the movie, Fleur and Kreacher for example, and I know they could not have included every detail in the movie. Another thing I liked about this book was reading more about the subjects in Hogwarts. Potion, Defence Against The Dark Arts and even Charms are all subjects I would eagerly swap my own subjects for instead !
Harry & Ginny...  OTP right there. They are perfect together. Their relationship built up from the second novel and I really enjoyed the slow progression from friends to love over the course of the novels. I feel J.k Rowling accomplishes this through both Harry & Ginny's relationship and also Ron & Hermione's. Jk Rowling kept the pace and suspense going at a steady pace throughout the novel, and this is another aspect I liked about the book. I didn't feel it was slow in any part and it definitely captured my attention. Jk Rowling, can you do no wrong?